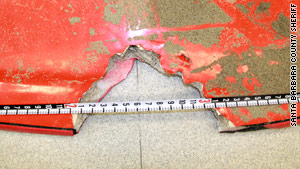 A shark, described as being 14 to 20 feet in length, bit off the left leg of Lucas McKaine Ransom of Romoland, California, while he was Boogie Boarding with a 20-year-old male friend, said a spokesman with the Santa Barbara County Sheriff's Department. Ransom was a junior at University of California at Santa Barbara. He was majoring in chemical engineering.

Authorities released a photograph of the Boogie Board, showing a 13-inch bite mark.

Air base fire personnel pronounced Ransom dead at the scene.

Federal and state fish and game officials are trying to identify the type of shark.

Surf Beach is one of three that sit on the coastal military base, and officials closed all three beaches at 9:46 a.m. Pacific (12:46 p.m. ET), shortly after the shark attack, an air base spokesman said.

"Our first responders were on scene to assist in rescue efforts," Col. Richard Boltz, 30th Space Wing commander, said in a statement. "Our thoughts and prayers go out to the family and friends."

The three beaches will remain closed for 72 hours, the spokesman said.

Surf Beach is open to the public, but the other two -- Wall and Minuteman beaches -- are open to base personnel only, the spokesman said.