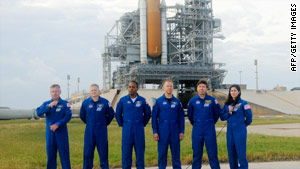 The crew of the shuttle Discovery is scheduled to take off November 1.
STORY HIGHLIGHTS
RELATED TOPICS

(CNN) -- Astronauts set to launch into space early next month are focused on their mission, NASA officials said Thursday, blocking out "distractions" over layoffs and changes at the space agency and sentimentality as the shuttle program nears its end.

The space shuttle Discovery is scheduled to take off November 1, returning to Earth the morning of November 12 after what NASA flight director Bryan Lunney described as a "very busy mission."

"After we fly around the Earth about 170 times, Discovery will come home for its last flight," Lunney said Thursday during a news conference in Houston, Texas, detailing the mission. "The crew is ready to go."

On October 1, more than 900 NASA workers were laid off ahead of the shuttle program's retirement. More than 8,000 NASA workers could see their jobs eliminated as the last shuttle launches next year. The agency is moving to shift to commercial manned rockets and develop new technologies.

"Yes, we know the end is coming," Lunney said. "And we are dealing with those distractions."