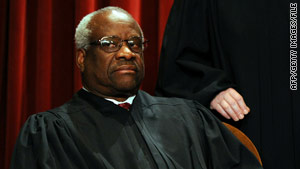 In a statement to CNN, Virginia "Ginni" Thomas said: "I did place a call to Ms. Hill at her office extending an olive branch to her after all these years, in hopes that we could ultimately get past what happened so long ago. That offer still stands, I would be very happy to meet and talk with her if she would be willing to do the same. Certainly no offense was ever intended."

Hill, a law professor at Brandeis University, turned the message over to campus security, a university spokesman said.

According to a source at Brandeis who spoke on condition of not being identified, the message left over the weekend said:

Hill, who formerly worked for Clarence Thomas, testified at his 1991 Senate confirmation hearing that he used inappropriate sexual language around her. The testimony dominated the hearing by the Senate Judiciary Committee, which deadlocked on the nomination to send it to the full Senate without a recommendation. The Senate approved Thomas' nomination on a 52-48 vote.

Ginni Thomas is a conservative activist who founded the organization Liberty Central.