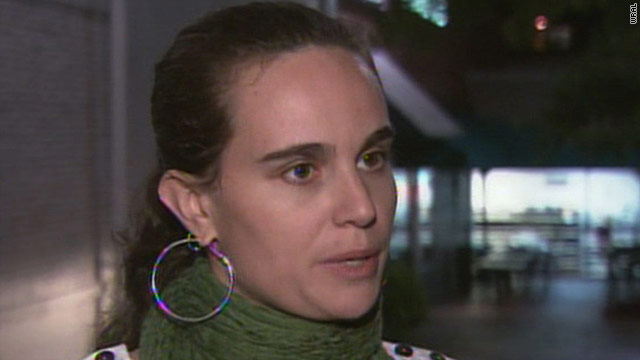 Caitlin Breedlove says she and her partner were kicked out of a shopping center because a security guard said they were being inappropriate.
STORY HIGHLIGHTS
RELATED TOPICS

Read more about this story from CNN affiliate WRAL.

(CNN) -- A lesbian couple who say they were asked to leave a North Carolina shopping center after sharing a kiss and a hug met with the center's property manager on Saturday.

"We welcomed the opportunity to sit down with the women and offer our sincere regrets over last week's incident," said George York, president of York Properties, which manages the Cameron Village shopping center in Raleigh, North Carolina. The incident took place Wednesday at Cameron Village.

Caitlin Breedlove told CNN Raleigh affiliate WRAL that she and her partner were being affectionate, but appropriate with one another, when a security officer asked them to leave the shopping center.

The officer told the couple that they were being inappropriate and that "nobody wants to see that here at Cameron Village," Breedlove said.

The couple asked to speak to the officer's supervisor.

Dan Palatucci, who manages the Flying Biscuit restaurant at the shopping center, where the couple had eaten before the incident, told WRAL that he also voiced concern about the officer's actions to Cameron Village's management. "We really just don't discriminate at all," he said. "We love everybody that loves our food."

On Saturday, York said his company is planning additional sensitivity training for its security personnel.

"We apologized that the women were offended, and we affirmed that Cameron Village and York Properties, Inc. have no tolerance for discrimination of any kind and believe all people deserve the right to be treated fairly in their work, homes and daily lives," York said in a statement.

A letter of apology was also sent to the women, he said.

Breedlove is a gay activist, but she says the incident wasn't planned.

WRAL reported that the American Civil Liberties Union may take legal action over the episode.