In an Iowa cornfield, seeds of hope for Afghan and Pakistani farmers 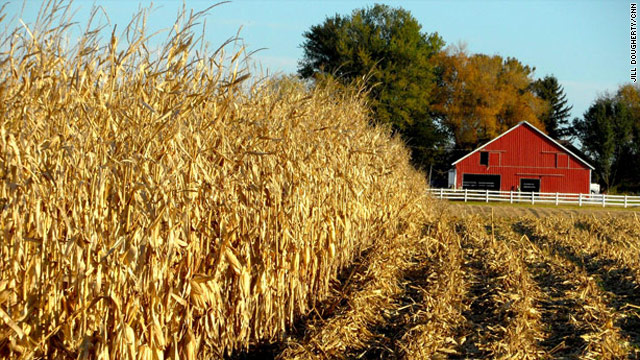 The agricultural ministers of Afghanistan and Pakistan are trying to learn valuable lessons in a lush and profitable Iowa cornfield.
STORY HIGHLIGHTS
RELATED TOPICS

Editor's note: CNN Foreign Affairs Correspondent Jill Dougherty and National Security Producer Laurie Ure were given exclusive access as the Afghan and Pakistani agricultural ministers went to Iowa. See the report Monday on CNN's "The Situation Room" with Wolf Blitzer (5 to 7 p.m. ET) and on CNNi's "Connect the World".

Colo, Iowa (CNN) -- Across the road from his cornfield in Colo, Iowa, family farmer Keith McKinney pulls out his cell phone and checks the latest market prices from the Chicago Board of Trade.

Armed with that information, McKinney can sell his crops when he wants, locking in prices even before they're planted.

"If they can sell corn, potatoes and pomegranates next year and get some advance, they will never do poppies," he says.

Rahimi, in a sports jacket, and his Pakistani counterpart, Nazar Muhammad Gondal, in a dark suit, have come to the McKinney farm to see how an American farmer turns his fields into income. They climb aboard a massive combine and set off across the field with McKinney's helper to harvest corn.

Just one combine can harvest the equivalent of more than 17 football fields an hour, leaving just a handful of kernels behind. 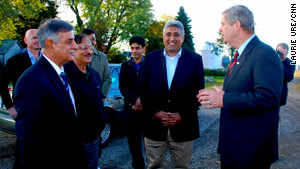 Their host, U.S. Agriculture Secretary Tom Vilsack, says he wants the men to see McKinney's farm so they "can see the possibilities of a maturing agriculture economy and what that looks like and the success that could bring to families and communities."

But agriculture in Iowa and agriculture in Afghanistan and Pakistan are worlds apart, and not just geographically. In those countries, an average farm is just 5 to 25 acres. The McKinney farm is almost 2,000 acres and that's considered just average here in Colo.

Inside a barn, the agriculture ministers take part in a round-table discussion with Iowa State University officials.

"What we want to do is empower the universities and schools in Afghanistan and Pakistan to be thinking about how we can develop partnerships and relationships with Iowa State and other land grant universities," Vilsack says. "How can we learn from their experiences?"

Vilsack says he knows how hard it is to translate sophisticated American farming techniques to such countries as Afghanistan. Growing poppy for drugs can make economic sense for farmers in Afghanistan -- the world's biggest producer of the plant that produces opium, Vilsack concedes.

"You have to understand that what the Afghan farmer is doing is rational," he says.

The Taliban give farmers the cost of raising poppies upfront; the farmers don't have to risk any money.

"The price they can get for poppies is three, four, five times more than what they can get for a hectare of wheat," Vilsack says. "So what we have to do for building the Afghan economy is to suggest that there are other cash crops that could be grown and that we can prove will actually benefit the farmers to a greater extent than growing poppy. Pomegranates, almonds, saffron, for example."

But to raise crops like that, he says, the Afghan government would have to set up a credit system, provide storage facilities, and other supports.

"It's very difficult to take the model from here and just apply it in Afghanistan," Rahimi says.

American farmers are educated. They use automated machines and the internet, for example, he says.

"That's why I'm saying if we can get the idea from here and then, based on the context in Afghanistan, then we can use it to some extent possible for us."

As Gondal walks through the McKinney farm, he has problems on his mind: the massive floods that devastated agriculture in his country this summer.

"We lost cotton, we lost sugar cane, rice, livestock," he says. "The primary losses are more than $45 billion."

McKinney is realistic about his Afghan and Pakistani counterparts: "They have to use donkeys and mules for power."

But he thinks it wouldn't take a lot to improve crop yields in Afghanistan and Pakistan.

"Better seed, better cultural practices, the way you till your land and take care of it. More fertilizer and those kinds of things that are just second nature here," he says.

It's just a kernel of hope, he knows, and it could take a long time to ripen.