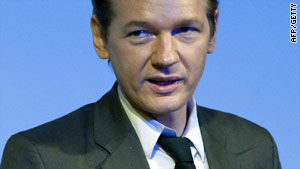 Washington (CNN) -- The company that had been collecting donations for WikiLeaks has ended its business relationship with the whistleblower website.

WikiLeaks founder Julian Assange claims the U.S. government was behind the decision by Moneybookers to shut down the account, an allegation denied by American officials.

The shut down was first reported by The Guardian newspaper.

WikiLeaks was thrust into the international spotlight earlier this year when it released tens of thousands of classified U.S. military documents about the war in Afghanistan.

According to e-mails provided to CNN by Assange, Moneybookers informed WikiLeaks of its decision in August, shortly after the Pentagon demanded WikiLeaks return all of the military documents and remove them from its website. WikiLeaks refused to do so and is expected to release hundreds of thousands of additional Pentagon papers later this month.

The first e-mail from Moneybookers that notified WikiLeaks of its decision indicated one of the potential grounds for termination was "to comply with money laundering or other investigations conducted by government authorities, agencies or commissions."

When Assange asked for a further explanation, he received another e-mail from the company saying the account was initially suspended "due to being accessed from a blacklisted IP address. However following recent publicity and the subsequently addition of the WikiLeaks entity to blacklists in Australia and watch lists in the USA, we have terminated the business relationship."

Moneybookers refused to discuss the specifics of its decision, but in a statement denied it had been asked by the United States to terminate the WikiLeaks account.

"We simply assess risk like any other financial institution," said the statement. "We can assure you that we have never had any direct request, inquiry or correspondence from any governmental authority regarding this former customer."

A U.S. Treasury Department spokesperson said the department, which handles financial sanctions, had no involvement with anything having to do with WikiLeaks.

A White House spokesman said U.S. sanctions are straightforward and handled in a public fashion. If the United States had taken legal action, it would have said so, according to the official.