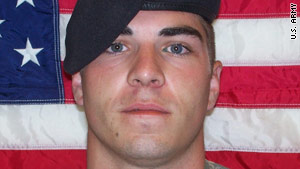 Spc. Jeremy Morlock is one of five U.S. soldiers accused of premeditated murder in the slayings of Afghan civilians.
STORY HIGHLIGHTS

(CNN) -- A U.S. soldier accused of killing civilians in Afghanistan will face a court-martial on murder and other charges, as recommended by an Army officer.

The document approving the recommendation for the court-martial of Spc. Jeremy Morlock was signed by the officer in charge Friday. It was obtained by CNN, along with other documents, that summarize last week's hearing at an Army-Air Force installation outside Tacoma, Washington, where prosecutors presented evidence against against Morlock.

Base officials would not confirm the authenticity of the document, which has not been publicly released.

Morlock is one of five members of the Army's 5th Stryker Brigade who is accused of premeditated murder in a series of incidents between January and May.

He has been charged with three counts of premeditated murder and several other charges, including obstruction of justice, assault and using drugs. Morlock's attorneys argued during last week's hearing that he was operating at "diminished mental capacity" because of the use of drugs, including hashish and pain medication.

But the recommendation from the investigating officer found "no evidence that the accused was behaving in an erratic, impaired or irrational manner" at the time of the killings.

In addition to the five men charged with murder, seven other soldiers from the same unit face charges ranging from conspiracy and interfering in a military investigation to drug use -- specifically hashish -- while in Afghanistan.