Lesbian couple file to adopt in Florida, where ban was overturned 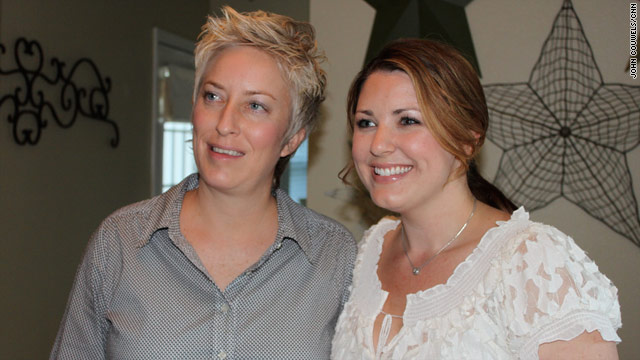 (CNN) -- A lesbian couple have applied to adopt a child after Florida's child advocacy agency announced it won't fight a court ruling that found the state's ban on such adoptions unconstitutional.

Jennifer Haseman and Hillary Jovi, who were unaware of Tuesday's announcement by the state, called Family Services of Metro Orlando, central Florida's child protective contractor, to begin the process of adoption.

The couple believed they could make their dream a reality after a September decision by the Third District Court of Appeal that lifted Florida's three-decade ban on gay adoption.

"We've wanted to adopt ever since we discussed wanting a family," said Jovi, who said she has had a 12-year relationship with Haseman. "We always wanted to have our own children and adopt."

The couple, formerly from New York, had considered moving back there just for the opportunity to adopt a child. Both women have battled infertility.

The Florida Department of Children and Families said any appeal by the state agency was likely to be unsuccessful following opinions from the appeal court and a circuit court judge in Miami, Florida. Gov. Charlie Crist ordered the department to stop enforcing the ban after the circuit court ruling.

"I don't think for us it is about sexual orientation so much as it is about a kid that deserves a second chance with a good parent or parents," said DCF spokeswoman Carrie Hoeppner.

The ACLU of Florida represented licensed foster parent Frank Martin Gill, who wanted to adopt two boys who had been placed in his care after the Department of Children and Families removed them from their home for neglect.

He sued to have the adoption ban overturned.

"We are happy to hear that DCF wants to bring this case to an end and allow the Gill family to get on with their lives," said Howard Simon, ACLU of Florida executive director.

But, the director says, the case is not yet final.

"What is needed now is a similar statement from Florida Attorney General Bill McCollum that will formally end this case and allow judges to decide -- on a case-by-case basis -- what is in the best interests of children."

Ryan Wiggins, spokeswoman for McCollum, said, "We appreciate the announcement, and look forward to a conversation with DCF about what the next actions will be."

The attorney general office has until October 22 to file an appeal.

Florida was the only remaining state to prohibit gay adoption. The state agency said Wednesday it has removed from adoption forms the question about an applicant's sexual orientation.

Jovi, an event planner and Haseman, a restaurant manager, said Monday they plan to attend an orientation class as the first step to become approved for adoption.

Haseman said, "I think it's going to be a really, really, great thing to just be able to help a child that needs a place, a home and needs love."