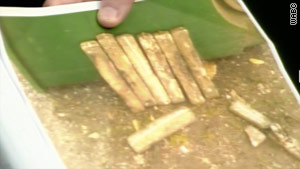 The eight bricks of military grade explosives were missing identifying markers manufacturers began to use after 1997.
STORY HIGHLIGHTS
RELATED TOPICS

New York (CNN) -- The explosives found in an East Village Cemetery Monday were made more than a dozen years ago, according to New York Police Department Deputy Commissioner Paul Browne.

The eight bricks of military grade explosives did not have taggants, identifying markers that manufacturers began to use after 1997 to help authorities trace explosives even after an explosion, Browne said Tuesday

The bricks of C-4 weighed a total of 10 pounds and have been identified as M112 bricks manufactured exclusively for the military.

The explosives were dug up in May or June 2009 by a groundskeeper and laid aside, Police Commissioner Ray Kelly told reporters. A volunteer cleaning inside the cemetery found the bag on Sunday and called police the next day, Kelly said. The explosives were not set up or wired to detonate.

Each stick is about one and a quarter pounds, said Kelly, who identified the powerful explosive as C-4.

"Inside a building, obviously it could have caused an awful lot of damage," he said.

Kelly added the material was taken to a police firing range by members of a bomb squad.