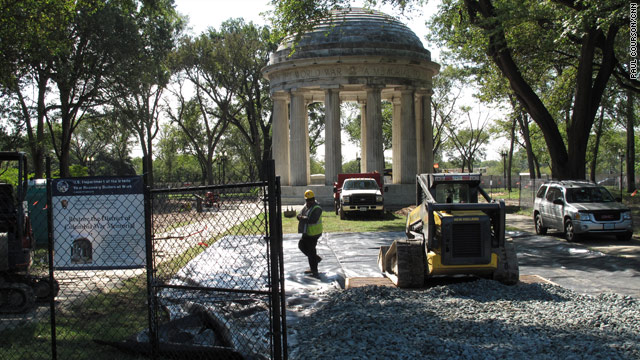 Workers have been clearing away overgrown brush and removing trees obscuring the World War I Memorial on the National Mall.
STORY HIGHLIGHTS

Washington (CNN) -- After nearly 40 years without any major upkeep, the World War I Memorial on the National Mall is finally getting some attention, with renovations financed by federal economic stimulus money.

It has become a race to complete the project because of the failing health of Frank Buckles, the 109-year-old former U.S. Army corporal who is the last surviving American veteran of World War I.

The monument is temporarily closed to the public as work begins, but through a safety fence workers Friday could be seen clearing away overgrown brush and removing some large trees that obscured the marble gazebo.

Buckles in recent years found himself the spokesman for his comrades as the last man standing. The retired West Virginia farmer wants national status bestowed on the memorial, which was constructed in the 1930s to honor some 26,000 men from the District of Columbia who served in the "Great War."

But legislation naming both the District of Columbia site and one in Kansas City, Missouri, as official national monuments of the war has stalled, despite hope the bill, titled the Frank Buckles Memorial Act, will be signed in time for him to see his wish come true.

In May, officials gathered at the overgrown, neglected site to announce that a repair and restoration project could proceed, thanks to funding from the U.S. Recovery Act. The contract is overseen by the National Park Service.

"We hope to have it completed in the next year," said Rebecca Miller of the D.C. Preservation League, an advocate for historic sites around Washington. She told CNN a formal groundbreaking is planned for Veterans Day, November 11, the date in 1918 when the Armistice was signed. The D.C. Memorial was dedicated on Armistice Day, as it was then known, in 1931.

Will the old soldier be able to again make the trip? A source close to his family says Buckles no longer enjoys the kind of health that allowed him, when he was only 107, to meet with the president at the White House and then go to the Pentagon to meet with the defense secretary.

Two years later, the family says he finds it more difficult to speak and to focus on conversations. Yet, as recently as last December, Buckles made a trip to Capitol Hill to testify on behalf of the legislation now bearing his name.

"The memorial (on the Mall), it's an excellent idea!" he told lawmakers at a hearing.

During a quiet party marking his 109th birthday in February, Buckles told CNN at his West Virginia farmhouse that "the important thing is the desire to live, and a purpose for living."

He has undertaken his efforts for the memorial because, as he put it, "I have to," as the last representative of the Doughboys, as the World War I U.S. soldiers were called.

Buckles on his birthday this year also tried speaking in Spanish, one of several languages he has known in addition to his native English. He noted that people in South America reportedly sometimes live to 110 and 120.