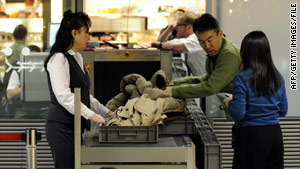 The alert is warns American citizens in Europe to be aware of their surroundings while traveling.
STORY HIGHLIGHTS

Washington (CNN) -- The U.S. State Department has issued a travel alert for U.S. citizens in Europe, based on information that suggests that al Qaeda and affiliated organizations continue to plan terrorist attacks. Americans are warned to be aware of their surroundings and protect themselves when traveling.

One senior U.S. official said earlier that in addition to the travel alert from the State Department, "U.S. military installations are taking prudent precautions. This is a serious situation."

A separate U.S. official said the alert is being prompted by the volume of intelligence on possible terror threats, rather than new intelligence.

It emerged last week that U.S. intelligence officials were looking at information about a possible "Mumbai-style" attack in cities across Europe.

A United Kingdom security source said Saturday that it was not believed the expected U.S. alert was a result of new intelligence received in the last few days.

But the source added that the intelligence related to the possible Mumbai-style attack was being looked at very seriously on both sides of the Atlantic.

The security source said there are no plans to raise the terror threat level in the United Kingdom from severe to critical.

A possible backlash from the French burqa ban is considered a factor in the expected warning, the security source said. The French Senate recently approved a law banning veils that cover the face, including the burqa, worn by some Muslim women.

Mumbai, the financial hub of India, was the site of a three-day terror attack two years ago that left more than 160 people dead.

A U.S. law enforcement official told CNN Saturday that an advisory will likely be sent to law enforcement agencies around the United States after the travel alert is issued, "just to keep them in the loop."

But the official added that current intelligence is about Europe rather than a threat in the United States.