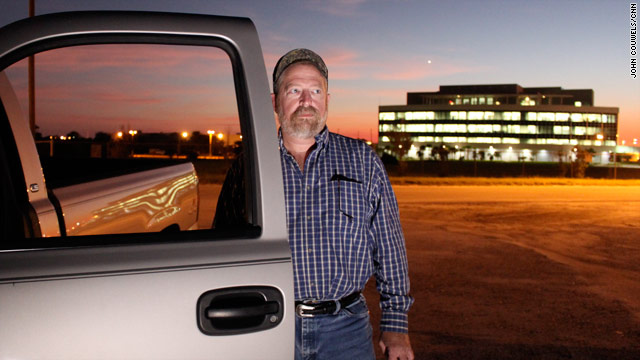 He showed up for his last day at 7 a.m. Friday, turned in his employee badge and then left to go hunting.

"I'm very proud I was a part of this," he said. "There were some challenging times, but I am glad I was part of this team."

He is one of more than 1,200 United Space Alliance employees whose were laid off October 1: coincidentally, the same day NASA began operating in 1958.

Bundy, 50, started his career as a technician on the shuttle thermal protection system and then worked his way up to manager for Kennedy Space Center's orbital processing facility.

Now, he's updating his résumé and taking welding classes at Brevard Community College in hopes of finding another job.

McGinnis and the others who walked out the door of the Kennedy Space Center on Friday are some of the nearly 9,000 NASA employees whose jobs will be cut as the shuttle program nears its end.

Some of those jobs may be extended if President Obama signs the $19 billion budget for the space agency, passed by Congress this week, that authorizes an additional shuttle launch.

But the extension comes too late for Bundy and the other United Space Alliance employees.

The ending came as no surprise: Six years ago, President George W. Bush announced that 2010 would be the last year for the shuttle program.

Because many NASA workers like Bundy have specialized jobs, it will be hard to transition from the space agency to other employment.

With the help of federal funding, Florida has set up a transitional program to help aerospace workers prepare for new employment.

Many of the NASA employees seeking employment help are "like deer in the headlights," said Lisa Rice, president of Brevard Workforce, which runs the federally funded aerospace transitional program.

"First reaction: 'Where do I go? What do I do?' " she said, describing NASA employees' responses after being laid off.

Job loss, Rice explains, is kind of like a grieving process. With the help of the transitional program, aerospace employees are lead through the process of résumé writing, sharpening interviewing techniques and developing skills needed for new jobs.

Many Kennedy Space Center workers, like Bundy, have not written a résumé for more than 30 years. Transitional instructors teach workers how to include decades of experience into a one- or two-page résumé.

"You need to have a plan B," said transitional program director Judy Blanchard. "The shuttle is retiring, and the end is inevitable."

Boeing aerospace engineer Juan Vazquez took the warning to heart, having worked on shuttles for 23 years.

This year, he opened two laundromats that he runs in his spare time. To ensure that he would succeed as a small-business owner, Vazquez completed the transitional program's entrepreneur training class.

"I grew up on shuttle. I've been working on shuttle since I was 18 years old," Vazquez said. "I pretty much live and breathe this stuff. I really enjoy what I do."

Other shuttle workers have had a hard time coming to terms with the idea that there is no definite replacement for shuttle, according to Rice.

When Bush announced that the shuttle program would end in 2010, he said it would be replaced by the Constellation program to return man to the moon and beyond.

Many shuttle workers held out hope that they could find new jobs in the Constellation program, which would have included two new rocket systems and a new crew module to transport astronauts into space.

From the beginning, Constellation was plagued by underfunding. This year, Obama killed the program's future funding because of budget overruns and because it was behind schedule.

That could affect more than 20,000 workers along Florida's space coast, according to Rice.

"We are looking at 9,000 aerospace workers who will be affected with another 14,000 indirectly affected in community," she said.

For Bundy, walking away from Kennedy Space Center was not as hard as he thought, he said Friday morning. He praised United Space Alliance for going "above and beyond to help their people adjust, from job placement to constant job fairs."

But it's more about just losing a job, he explained.

"I have a lot of friends, a lot of teammates," Bundy said. "I wish them all the best, and I'm going to miss them all."