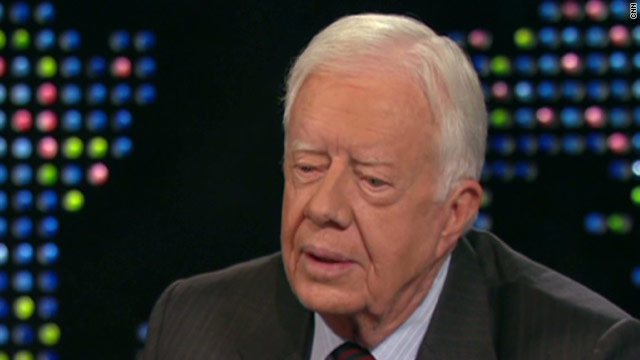 Former President Carter is resting comfortably after he was hospitalized Tuesday with stomach issues.
STORY HIGHLIGHTS

Read more about this story from CNN affiliate WEWS.

Cleveland, Ohio (CNN) -- Former President Jimmy Carter, spending a second night at a Cleveland, Ohio, hospital, is recovering from a likely viral infection, according to a joint statement Wednesday from the hospital and the Carter Center.

Carter, who suffered stomach distress Tuesday during a flight to Cleveland, was in "very good spirits" and will remain under doctors' observation at MetroHealth Medical Center, the statement said.

"His medical team ... has determined that the likely cause was a viral infection that is now clearing up," the statement said. "President Carter thanks all those who have expressed concern and sent greetings to him."

Carter, who will turn 86 Friday, felt sick on his Delta Air Lines flight from Atlanta, Georgia, to Cleveland on Tuesday morning. Emergency crews performed an initial checkup on the former president as soon as he landed and then transported him to MetroHealth.

"He is fully alert and participating in all decision-making related to his care," the hospital said earlier about Carter, who received a phone call from President Barack Obama.

Carter was in Cleveland to sign copies of his new book, "White House Diary," and planned to resume the book tour soon. His scheduled appearances in Washington on Wednesday were canceled.

He and former first lady Rosalynn Carter are known as fitness buffs who maintain active lifestyles.

Carter recently returned from a trip to North Korea, where he secured the freedom of U.S. citizen Mahli Gomes.

During a September 20 appearance on CNN's "Larry King Live," Carter said he planned to stay busy in the future.

"I'll stay involved in the Carter Center as long as I'm physically and mentally able," he said. "I'm still a professor at Emory University. This is my 29th year as a professor. And I'll still write a book every now and then."