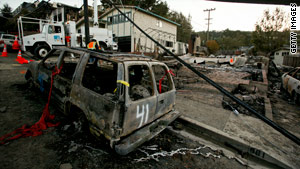 No FEMA aid coming for victims of explosion

An autopsy is being performed on James Emil Franco, 58, to determine the specific cause of death.

Meanwhile, federal officials have turned down California's request for federal disaster aid in the aftermath of the deadly explosion, a spokesman for the Federal Emergency Management Agency said Tuesday.

"FEMA has been in close contact with the state since the fire occurred, and based on the information they provided, it was determined that there was not a need for additional support at this time, beyond the federal assistance provided for response activities," said FEMA spokesman Brad Carroll.

A federal official told CNN the determination was based on information provided by the state, and the state can appeal within 30 days with additional information. FEMA cannot duplicate benefits, whether it's eligible insurance payments, or payments made by a responsible party, the official said.

The National Transportation Safety Board investigation into the cause of the ruptured Pacific Gas & Electric pipeline is ongoing.

Thirty-seven homes were destroyed in the blast just south of San Francisco.