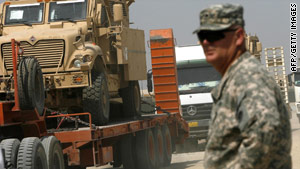 The report says Combat Support Associates failed to track 21 of 379 employees who were in sensitive positions.
STORY HIGHLIGHTS

Washington (CNN) -- A new Defense Department report says many civilian contractors working in Kuwait didn't have proper clearances and could have jeopardized the safety of U.S. military personnel and undermined national security.

The Defense Department Inspector General said dozens of contractors worked in sensitive positions without security clearances or the official passes they needed. And some of those people, according to the report, were allowed to remain on the job even after inspectors uncovered the security problems.

The department's inspector general says the company's security office failed to track 21 of 379 employees who were in sensitive positions, such as ammunition supply, and that 11 employees did not have a valid security clearance. In addition there was no information whether some of the employees had a U.S. passport, although U.S. citizenship was required by the contract

"Additionally, CSA officials allowed 20 employees to remain in sensitive positions without the required security clearance after its internal quality assurance office and DCMA ( the Defense Contract Management Agency, overseeing the contract) officials informed CSA officials that they were in violation of the contract," the report says. "If DCMA and contractor officials do not ensure that all employees have the required security clearances and maintain proper security information, they jeopardize the military mission and threaten the safety and security of the military, civilian, and contractor personnel in Kuwait."

CNN was unable to contact representatives of the contractor. The inspector general's report says the company claims it did not understand the terms of the agreement.

"According to CSA's human resources information system analyst, the Army did not clearly define or designate all sensitive positions; therefore, CSA officials relied on their own department managers to determine which positions required a security clearance," the report says.

And the report suggests the Army and Pentagon's oversight of the contract may have been lacking.

"If the Army does not ensure that all contractor employees have the required security clearances and maintain proper security information, these employees pose a threat to the military, civilian, and U.S. contractor personnel in Kuwait, as well as to national security," the report says