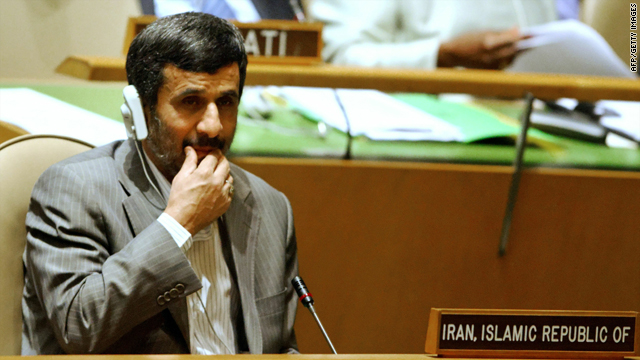 United Nations (CNN) -- Iranian President Mahmoud Ahmadinejad is among the world leaders scheduled to speak Tuesday at a United Nations summit on global goals to fight poverty, hunger and disease.

Government leaders and heads of state are discussing the Millennium Development Goals, which they agreed to a decade ago. The goals have a deadline of 2015 and include a target for halving extreme poverty

Ahmadinejad is on a public relations offensive this week in New York, addressing the session on tackling world poverty, giving interviews and speaking Thursday in the assembly's general debate.

The Iranian president told ABC News on Sunday that, after he helped free American hiker Sarah Shourd, there should be some payback from U.S. President Barack Obama.

"I believe that it would not be misplaced to ask that the U.S. government should make a humanitarian gesture to release the Iranians who were illegally arrested and detained here in the United States," he said.

U.S. officials have said those cases have nothing to do with each other.

Meanwhile, while global leaders try to figure out how to get their anti-poverty goals back on track, protesters are planning several demonstrations against Ahmadinejad this week.

Outside his hotel, critics want the management to kick him out of his room. "Blood on his hands, blood on your pillows," an online petition publicizing a protest there says.

Canadian college student Ali Ziaei came to New York to help organize the protests -- something he said people in Iran are not free to do.

"You saw over the past year, people come to the streets and demand change, and all they face is execution," he said.