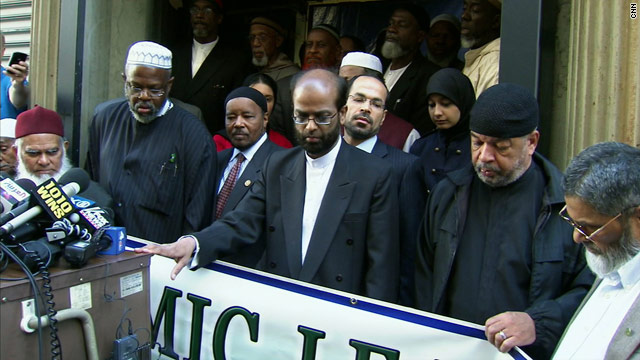 A group representing more than 55 mosques and Islamic organizations in New York City voiced its support for the Park51 project.
STORY HIGHLIGHTS

New York (CNN) -- Muslim-American leaders gathered Monday to voice their support for the building of mosques in America and, more specifically, for the planned Islamic center and mosque to be known as Park51 near Manhattan's ground zero.

Imam Al-Amin Abdul Latif, president of the Islamic Leadership Council of Metropolitan New York, read a joint statement on the steps of the Park51 location.

"We stand for the constitutional right of Muslims and Americans of all faiths to build houses of worship anywhere in our nation as allowed by local laws and regulations," he said.

He added that the group represents more than 55 mosques and Islamic organizations in New York City that "stand against the racism, hatred, religious intolerance and ethnic bigotry directed against Islam and American Muslims."

The group's statement also called for "a week of dialogue to help combat bigotry and promote understanding and religious tolerance in civil society."

Latif told reporters that a number of mosques all over the country will hold open houses during the weekend of October 22-24 to help people of other faiths better understand Islam and Muslims.

Mahdi Bray, a Muslim leader from MAS Freedom, said that he believes the Park51 Islamic center should be seen as "a symbol of reconciliation, a symbol of unity and a symbol of mutual respect."

He noted that "none of our organizations is capable of putting money into this. We're putting ideas and we're putting social and political support behind it."

The developers of Park51 issued a written statement following the news conference thanking Muslim-American leaders for their support:

"Our community remains committed to building bridges of understanding to our neighborhoods, to our city and to the rest of America. Park51 will embody that commitment. In doing so it provides much needed services to New Yorkers of all backgrounds who live and work in Lower Manhattan."

Nihad Awad of the Council on American-Islamic Relations acknowledged that the developers could have handled the project better but said they are doing what everyone does when they misstep: "You just pick yourself up and move forward and that's what happening now," he said.

The Park51 project is no longer a case, it is a cause, Awad said. And because it has become a cause he believes it will get the funding it requires to be completed.

"This is America. Nothing moves America like a cause, and that includes money," he said.