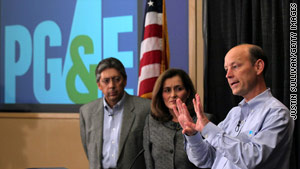 (CNN) -- A vintage segment of gas pipeline that exploded earlier this month was not on a list of the Pacific Gas & Electric's top 100 risky pipeline segments, the president of the company said Monday.

The 30-inch pipe that exploded in San Bruno, California, on September 9, killing four people, was laid in 1948, the same year a segment just two miles away -- one that was on the top 100 list -- was laid.

"That segment of pipe?" PG&E president Chris Johns said, referring to the San Bruno segment. "It was not on the top 100 list."

"We were not aware of anything in this particular area that met the criteria of what would have put it on the list," Johns told reporters.

Johns said the list is used for planning purposes and can change.

"In some instances, all we are doing is monitoring that segment," he said.

Johns said the company was making public the current version of the list, compiled in 2009. In the future, he said, an interactive locator will be available on line, but for now customers can call PG&E to learn if they live near a transmission pipeline or one of the riskiest segments.

Last week, a utility watchdog organization revealed that PG&E planned to replace a segment of pipeline just a couple of miles from the San Bruno segment but never spent the $5 million of rate increases it received to do the work. Two years later, the company asked for another $5 million to complete the project, which has not begun, by 2013.

That segment, TURN [The Utility Reform Network] said, was on the top 100 riskiest segment list. PG&E said in response that the utility reevaluated its repair and replacement plan after an updated assessment in 2009, the year it was supposed to have completed the project.

But Johns defended the company's record on high-risk segments. He said the company had spent $30 million more on repair than it asked for last year and that safety is the top priority.

"Whenever we identify any potential threat to public safety, we immediately go address the situation," he said. "We don't put it on some list."

The September 9 blast blew in the doors of a grocery store a quarter-mile (400 meters) away, and the explosion and resulting fire injured 52 people and destroyed 37 homes. The explosion blew a 28-foot section of the pipeline 100 feet in the air.