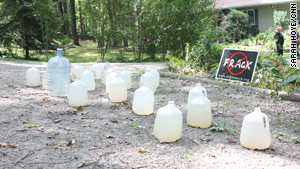 Jugs of water sit in front of a house in Dimock, Pennsylvania, where residents are suing Cabot Oil and Gas Corp.
STORY HIGHLIGHTS

(CNN) -- Water testing by a private environmental engineering firm has discovered toxic chemicals in wells in a township in Susquehanna County, Pennsylvania.

Victoria Switzer, a resident of the northeastern Pennsylvania township of Dimock, revealed the results of the water tests from her well this week at an Environmental Protection Agency hearing on hydraulic fracturing in Binghamton, New York.

Hydraulic fracturing, or "fracking," is a controversial process used to extract natural gas from deep underground. Critics say chemicals used in the process can be injected into groundwater.

What the 'frack' is 'fracking?'

The contaminated Dimock wells are in the Marcellus shale formation underneath parts of Pennsylvania, New York, West Virginia and Ohio, one of the largest natural gas deposits in the nation. The profitable natural gas reserve is attracting a flurry of gas companies wanting to drill.

The tests, which were verified by three certified laboratories, found chemicals in the majority of samples taken from water wells in Dimock, said Daniel Farnham, president of Farnham & Associates, based in Scranton, Pennsylvania.

"For anybody to say this was occurring prior to drilling is ludicrous," Farnham said Friday. "The water was not like this before."

In 2008, Farnham was contracted by Cabot Oil and Gas Corp., the company working in the Dimock area, to perform pre-drilling tests on numerous wells in Susquehanna County, he said, adding that he did not test for nor discover ethylene glycol, propylene glycol and toluene.

Despite his latest findings, however, Farnham said he cannot reach any conclusions about the source of the chemical compounds found in the drinking water wells.

"Unfortunately no one can say that right now, until there is a way to track frac fluids," he said. "And I think the gas companies know that."

Ethylene glycol, propylene glycol and toluene are on the list posted on the Pennsylvania Department of Environmental Protection's website of chemicals used by hydraulic fracturing companies in the state.

But George Stark, a spokesman for Cabot Oil and Gas Corp., said his company does not use the chemicals discovered by Farnham & Associates.

"When we look at the ingredients we use in fracking and completing of wells, these chemicals are not found. Toluene is not at all used," Stark said. "If you look at what Dan said, he found these and he can't trace these to fracking.

"The fact is that we don't use these chemicals," Stark said.

The chemicals have a number of common applications and appear in products ranging from toothpaste to antifreeze, Farnham said. But they can be toxic in higher concentrations.

The Department of Environmental Protection is conducting its own water tests across Dimock, spokesman Tom Rathbun said.

Department water tests in April across Dimock for ethylene glycol and propylene glycol were negative, and the agency is testing for "toluene and a host of other constituents," he said.

On Friday, Rathbun said that Department of Environmental Protection Secretary John Hanger plans to make a "major announcement" regarding water supplies in Dimock at the end of September. He would not elaborate about the details of the announcement.

The Environmental Protection Agency concluded its final hydraulic fracturing hearing on Wednesday in Binghamton. The EPA plans to begin a study in January and release initial results by late 2012.

Switzer is among a group of Dimock residents who sued Houston-based Cabot Oil and Gas in November, alleging that the company contaminated their well water with methane gas and other contaminates.

In hydraulic fracturing, drillers pump large amounts of water mixed with sand and chemicals into the shale formation thousands of feet underground under high pressure. Fracturing the shale around the well then allows the natural gas to flow freely.

"This industry is cradle-to-grave," Switzer said. "And this baby has teeth."