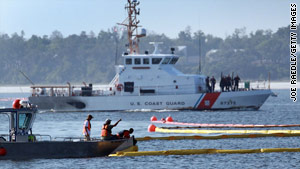 The government may sue BP for the cost of removing oil, loss of tax revenue and destruction of natural resources.
STORY HIGHLIGHTS

New York (CNN) -- The Justice Department says it may sue BP for damages from the Deepwater Horizon oil spill, according to a filing made Monday night with the U.S. District Court in New Orleans, Louisiana.

"At this juncture, the United States expects that it may file a civil complaint related to the Deepwater Horizon disaster," the court document says.

While the legal wording of the filing presents some ambiguity, the Justice Department has gone as far as to signal its intent by requesting that the court establish a track separate from the many private lawsuits. The government says its claims, "may involve complex scientific and economic expert testimony" that may not be needed to quantify claims from private parties.

Other companies involved in the Deepwater Horizon drilling accident also might be subject to a federal lawsuit.

Justice Department attorneys told the court they may seek claims under the Oil Pollution Act, which was enacted in 1990 after the Exxon-Valdez oil spill, and the Clean Water Act, which gives the government the right to seek potentially huge penalties.

"The Clean Water Act authorizes the United States to seek civil penalties from various entities for oil spills like the Deepwater Horizon spill, in amounts potentially up to $1,100 (and in some circumstances up to $4,300) per barrel of oil spilled," the filing states.

Justice attorneys argue the government may seek compensation for the cost of removing oil; economic damage such as the cost of increased public services and loss of tax revenue; and destruction of natural resources and assessment of that damage.

The Justice Department has been conducting both civil and criminal investigations into the Deepwater Horizon accident. A department official would not give a timetable for legal action.

BP has already agreed to set aside $20 billion over several years to pay for claims resulting from the oil spill.

The company has paid the U.S. government $390 million for the cost of cleanup and last week received an additional bill for $128.5 million from the Obama administration.