Award will be exception to recent posthumous Medals of Honor 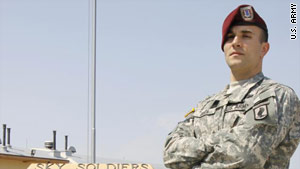 Staff Sgt. Salvatore Giunta is being awarded the Medal of Honor for his actions in battle in Afghanistan in October 2007.
STORY HIGHLIGHTS
RELATED TOPICS

Find out how Staff Sgt. Salvatore Giunta earned the Medal of Honor.

Washington (CNN) -- On March 25, 1863, in the heat of the U.S. Civil War, Pvt. Jacob Parrott and six other Union soldiers received the Medal of Honor for going 200 miles behind enemy lines to hijack a Confederate train. He became the first U.S. service member to receive the medal. Parrott survived the Civil War and, according to several websites, went on to become a cabinetmaker.

Fast-forward to September 17, 2009, when Sgt. First Class Jared Monti was awarded the Medal of Honor for heroics in Afghanistan. President Obama handed the medal to Monti's parents, because Monti died earning his medal.

Of the 3,466 Medals of Honor awarded since Parrott received his, only 619 have been awarded posthumously, according to the U.S. Army.

But in the past four decades, posthumous Medal of Honor ceremonies have become the rule rather than the exception.

For all the military actions since the end of the Vietnam War, only eight Medals of Honor have been awarded: two for the "Black Hawk Down" incident in Somalia, four for Operation Iraqi Freedom and two for the war in Afghanistan, the longest war in U.S. history. None was given for Operation Desert Storm in Iraq, the fighting in the Balkans, Panama, Grenada or the Marine barracks bombing in Lebanon.

All eight of those medals were awarded posthumously. It's something the Pentagon wanted to change, and Friday, the White House said Obama called Staff Sgt. Sal Giunta to tell him he will soon receive the familiar gold star medal on a light blue ribbon. Giunta is being recognized for risking his life to save a fellow soldier who had been captured by the Taliban. Giunta survived battle and is alive and well to attend the White House ceremony to receive the medal.

Last year, Defense Secretary Robert Gates was asked about the lack of a living Medal of Honor recipient. "This has been a source of real concern to me," Gates said at the time.

On Friday, Geoff Morrell, the secretary's spokesman, said Gates was "delighted that someone who survived his act of heroism will be honored." Gates probably will call Giunta next week to congratulate him.

Perhaps the reason there are so few living Medal of Honor recipients is that there have been so few recipients at all.

Compare the eight Medals of Honor that have been awarded for heroism in the last 40 years with World War II, when the battle of Iwo Jima produced 27 such medals and 15 men were honored for heroism during the attack on Pearl Harbor.

Last year, Marine Corps Commandant James Conway explained one reason why the medal has become more rare. "The rules haven't changed; the rules and the requirements are still the same," he said.

"I think it has something to do with the level of intensity of the conflict," Conway said. "If you go back and look at some of the fights that took place in Vietnam, Korea, World War II, there were massive numbers of troops involved in massive engagements over a period of days. That's not the type of conflict that we are seeing in a type of counterinsurgency in Iraq and Afghanistan."

"So I think that's perhaps the single most determining factor here as you look at awarding or not awarding a medal," Conway said.

It is also important to note that when the Medal of Honor was authorized by Congress (which is why it's often called the Congressional Medal of Honor, because the president presents it on behalf of Congress), it was only one of two medals a soldier could earn. The other was the Purple Heart, which goes to soldiers wounded or killed in combat. Since then, the Silver Star, the Distinguished Services Crosses, the Bronze Star and numerous other awards have been created. So a service member's heroism may well be recognized with a medal, just not the Medal of Honor.

In some ways, no one wants to see any more Medals of Honor awarded.

"You don't want your soldiers to be put in that situation to where any of them have to rise to the occasion," Brian Thacker, an Army veteran who earned the Medal of Honor in Vietnam, told CNN last year.

Conway echoed that sentiment. "Any time a soldier or a Marine wins the medal, then his unit is in extremis, and he's doing very heroic things ... to make that situation better. I don't want to wish that on anybody."

But if there are heroes, all agree they should be recognized, and now one hero will be there to hear the applause and shake the president's hand.

One day before the White House announced the award for Giunta, the administration said it will also award the Medal of Honor to Staff Sgt. Robert J. Miller, who saved the lives of his fellow soldiers and 15 Afghan National Army troops. Miller's award will be given to his parents. Miller died saving those lives.