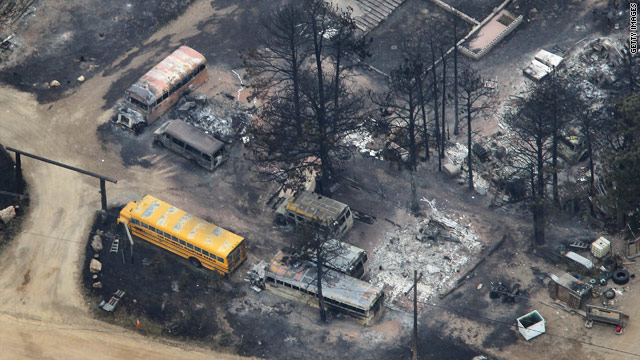 If you are being affected by the wildfires, please share your images and information with CNN iReport.

Boulder, Colorado (CNN) -- Authorities in Boulder, Colorado, warned some residents to prepare to evacuate Thursday as winds gusting as high as 50 mph threatened to drive a raging wildfire out of the hills and into city limits.

The Fourmile Canyon fire already had charred nearly 6,400 acres of countryside and destroyed 169 homes west of Boulder by mid-morning Thursday. High winds that could whip the fire toward the city were expected to kick up Thursday evening and last throughout the night, forecasters predicted.

About 8,000 people in the hills west of Boulder have already been forced to evacuate. No evacuations have been ordered for city residents yet, but Boulder municipal spokeswoman Sarah Huntley said they should "think about the possibility of evacuating" and have clothing, important documents and needed medication ready to go if necessary.

"We absolutely hope this won't be necessary, but this is a really good reminder that we live in a community that does potentially have a fire danger," Huntley told reporters. "Obviously, some of our neighbors have found that out, and our hearts definitely go out to them. We're asking city residents to be on notice."

Huntley said people living on the northwestern edge of the picturesque university city should "do what they can to help us protect their home" by cutting grass short, removing combustible material from yards and moving propane tanks to the east side of their homes and making sure they're "clearly visible" to firefighters.

There have been no deaths or injuries, and four people who had been listed as unaccounted for have been contacted and are unhurt, Boulder County Sheriff's Cmdr. Rick Brough said. But while overcast skies and a bit of rain helped firefighters on Wednesday, the projected high winds raised new concerns Thursday.

"It takes one spark outside the line with the conditions tonight, and it's a new race," firefighter Rob Bozeman told reporters earlier Thursday. He said some portions of the blaze were "as extreme a fire behavior as I've seen -- not a front a mile wide coming at me, but fingers coming up."

Bozeman said "entire chains of trees" were ablaze, running up the sides of the hills into subdivisions and setting houses on fire.

"The fire behavior was so intense that when that heat hits, the firefighters have to pull back," he said. If firefighters can get back into the area and start spraying water onto a home, "You can save it. But if it's happening all over the place, you can't get to all of them," he said.

The fire started Monday morning. Its cause was still under investigation, Brough said.

About 550 firefighters were battling the blaze Thursday, with 160 others arriving for duty, said Laura McConnell, a spokeswoman for the Boulder County Incident Management Team. Aircraft were also being used, with more than 100,000 gallons of fire retardant dropped from the air Wednesday, authorities said.