In one day, two asteroids buzz the Earth 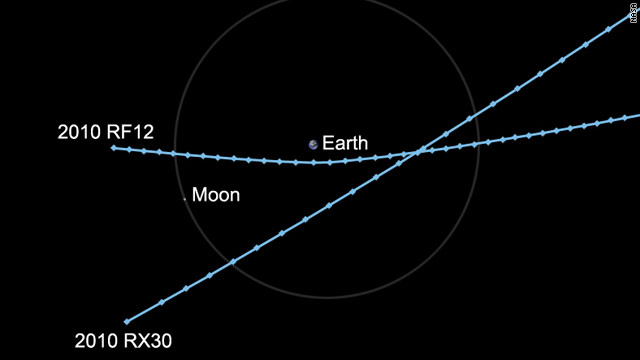 (CNN) -- Two small asteroids passed within the moon's distance from the Earth about 12 hours apart on Wednesday, NASA confirmed.

That means the two asteroids passed within 0.6 and 0.2 lunar distances from the Earth, respectively.

The group is awaiting official data from observatories across the world to confirm the exact time, sizes and orbits of the two objects, said Donald Yeomans, manager of NASA's Near Earth Program, which tracks potentially hazardous asteroids and comets within 28 million miles of Earth.

Wednesday's double encounter was unusual in the sense that NASA spotted the objects three days in advance and successfully plotted their orbits, he said, demonstrating the need for closer monitoring of near space for Earth-threatening encounters.

"It just confirms that the process we have in place -- whereby we observe and find them and then we quickly predict when they'll pass Earth and get that info out -- that process works pretty well," Yeomans said. "The search for the next one goes on."

The objects did not threaten Earth, and could only be seen as tiny specks of light using moderately sized amateur telescopes. Stony objects of the two asteroids' size would not be expected to make it through the Earth's atmosphere, but would put on "a great light show," Yeomans said.

Roughly 50 million objects pass through near-Earth space each day, Yeomans said. The more information NASA has on those objects in advance, the more it can do to prevent potential threats to Earth, he said.

"Things like this happen every day that we simply don't know about because we don't have the telescopes large enough to find them or surveys that are looking full-time," he said Tuesday.

Technology exists to adjust an object's path by directing an explosive device at it or running into it, just as the Deep Impact Spacecraft ran into the Comet Temple on July 4, 2005, he said.

"If you have several years warning, you can do it just by nudging it several millimters to change its path just enough to miss the earth," he said.

The Catalina Sky Survey near Tucson, Arizona, discovered both objects Sunday morning during a routine monitoring of the skies, NASA said. The Minor Planet Center in Cambridge, Massachusetts, first received the observations Sunday morning, determined preliminary orbits and concluded both objects would pass within the distance of the moon about three days later.

Yeomans described the discovery as a warning shot in a field of study of low-probability events with global, high-impact consequences.

"We have only recently appreciated how many of these objects are in near Earth's space," he said. "I think this is Mother Nature's way of firing a shot over the bow and warning Earth-based astronomers that we have a lot of work to do."