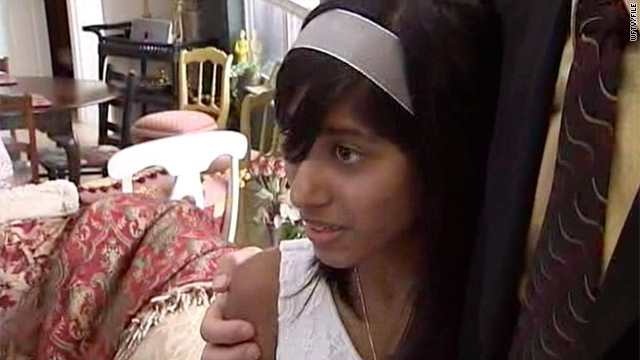 Rifqa Bary took refuge in the home of a minister in Orlando, Florida, after leaving her Columbus, Ohio, home in July 2009.
STORY HIGHLIGHTS
RELATED TOPICS

(CNN) -- A runaway who said her father threatened to kill her for converting to Christianity from Islam has been granted permanent residency in the United States, her lawyer told CNN on Tuesday.

Rifqa Bary, 18, who was an undocumented immigrant until recently, left her family in Columbus, Ohio, in July 2009 and took refuge in the home of a minister in Orlando, Florida. The girl was later moved into foster care after she said in an affidavit that her Muslim father had threatened her after finding out about her conversion. Her father denies the allegation.

Bary had said in court that she could not reunite with her parents and needed permission to live in the United States.

"I can confirm that she got her legal permanent residency status, and in five years she can actually become a citizen," said Kort Gatterdam, Bary's attorney. "She is still making plans about her future with those who care about her most. With the case being over only a couple of weeks ago, she hasn't had a chance to sit back and decide what she wants to do with her future yet."

Gatterdam said that Bary has not been in contact with any family members and that she is still afraid of them.

Bary was returned to Ohio from Florida late last year, and as a 17-year-old, she was placed in the custody of Franklin County Children Services while other issues in the case were being settled.

In an earlier court filing, Bary had alleged that her father had said, "If you have this Jesus in your heart, you are dead to me!" She says her father then added, "I will kill you!"

"We wouldn't do her harm," he has said, adding that he knew his daughter was involved with Christian organizations. "I have no problem with her practicing any faith," Bary added, but acknowledged he would prefer that she practice Islam.

A report by the Florida Department of Law Enforcement cleared Bary's parents of any criminal wrongdoing.