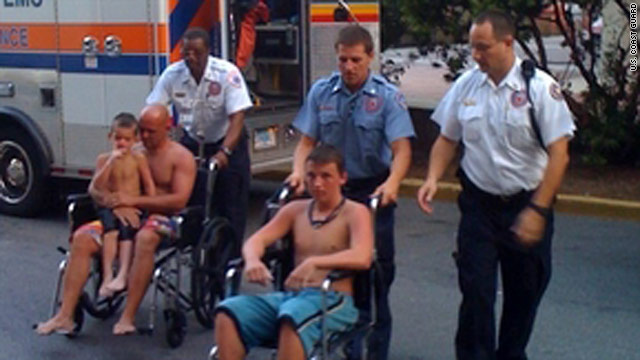 Three people involved in an overnight rescue arrive at the Medical University of South Carolina in Charleston on Sunday.
STORY HIGHLIGHTS

(CNN) -- Seven people, including three children, who were missing since Saturday night were rescued Sunday morning about 25 miles off the coast of Charleston, South Carolina, the U.S. Coast Guard said.

"They were cold, they were tired, but most importantly, they were alive," said Petty Officer 1st Class Christopher Evanson of the Coast Guard station in Jacksonville, Florida.

All seven were aboard a 38-foot powerboat that sank after the engine compartment flooded, the Coast Guard said in a statement. All were wearing life jackets.

Evanson told CNN Radio that airborne search crews were running low on fuel and were "getting ready to call it a night" when something was spotted in the moonlit water.

"One of our rescue flight mechanics had noticed something at the surface of the sea that looked something like a debris field. The only light he had to assist him in the search was the moonlight," Evanson said Sunday.

"He notified the flight commander and they made a turn and they approached that area where the debris field was and it turned out to be the swimmers, all seven of them floating, actually clinging to a cooler, floating in the water."

That all seven were wearing life jackets "was a major factor in the fact that we were able to save their lives," Evanson said. "It could have been much different had they not had life jackets."

Searchers were first alerted to the situation after the wife of one person on the boat contacted authorities to say the seven hadn't come home on time. Rescue crews located the missing boaters at 6:02 a.m. Sunday.

Evanson said those on the boat "made the decision to abandon ship" after the engine compartment started to flood but he said they were unable to call for help because they had no emergency communications equipment.

"They didn't have a VHF radio. They didn't have an emergency position indicating radio beacon ... that can pinpoint the location of a distress when a boat sinks. There was no signaling flares, nothing," Evanson said.

"It's a very fortunate situation ... that the rescue crew was able to identify these individuals utilizing just the moonlight."