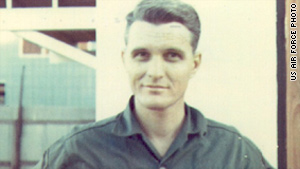 Master Sgt. Richard Etchberger will be given the Medal of Honor, according to the White House.
STORY HIGHLIGHTS

Washington (CNN) -- President Obama will award the Medal of Honor, the military's highest award for bravery, to Air Force Chief Master Sgt. Richard Etchberger for his valor in saving the lives of three wounded comrades at a then-secret base in Laos in 1968, the White House announced Friday.

His heroics were kept a secret for years because the United States wasn't supposed to have troops in Laos during the Vietnam War. President Lyndon Johnson rejected a nomination for Etchberger to receive the Medal of Honor at the time because of the political trouble it could have stirred up.

Etchberger was part of a secret U.S. Air Force radar base in northern Laos, just 120 miles from Hanoi in North Vietnam. The base's purpose was to guide U.S. bomber crews on their missions over North Vietnam and parts of Laos that were under communist control.

Laos was officially neutral during the war, but its leaders were upset that North Vietnamese troops and Viet Cong guerrillas were moving through Laos to attack U.S. troops in South Vietnam. So the Lao government allowed construction of the U.S. radar site provided it was kept secret, according to Tom Keany, an Air Force B-52 squadron commander during the Vietnam War and currently a military historian with the School for Advanced International Studies at Johns Hopkins University.

In March of 1968 North Vietnamese troops attacked the site, called Lima Site 85, with a force of 3,000 soldiers against fewer than a couple dozen U.S. airmen and about a thousand Laotian soldiers.

Eventually, American helicopters were sent in to evacuate the Air Force personnel, but by then eight Americans had been killed and several more wounded. It is considered by some the deadliest ground attack against Air Force troops in the entire Vietnam era.

According the White House, Etchberger deliberately exposed himself to enemy fire "in order to place his three surviving wounded comrades in the rescue slings permitting them to be airlifted to safety."

It took an act of Congress in 2008 for Etchberger to be reconsidered for a Medal of Honor so long after the war had ended. In most cases, the medal recommendation must be made within two years of the act of heroism for which it is to be awarded.

Rep. Earl Pomeroy of North Dakota helped push for the reconsideration. Etchberger was a native of Bismarck, North Dakota.

"Chief Etchberger was denied the Medal of Honor because he was serving his country on the wrong side of a geographic barrier," Pomeroy said in written statement. "Heroism knows no boundary. While it's regrettable that this medal is coming forty years after Mr. Etchberger's death, I am honored to be part of the effort that recognized this true hero."

The ceremony for Etchberger, which will include his three sons, is scheduled for September 21 at the White House.