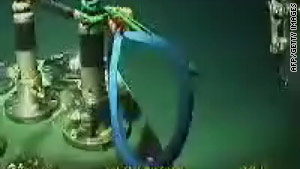 Crews plan to start work on removing the capping stack on top of BP's oil well in the Gulf of Mexico.
STORY HIGHLIGHTS
RELATED TOPICS

(CNN) -- High seas in the Gulf of Mexico have forced the postponement of an operation to remove the capping stack on the ruptured underwater oil well, detach the blowout preventer and replace it with a new one, BP said on its Twitter page Monday.

BP had planned to begin the procedure Monday, more than three weeks after plugging the ruptured well with cement and mud from above. The procedure is aimed at paving the way for a permanent fix for the well.

Retired Adm. Thad Allen had said earlier that crews would begin removing the capping stack that has trapped oil in the well since last month. That will allow them to detach the blowout preventer and replace it with a new one -- key steps before engineers use a relief well to permanently kill the well 18,000 feet below the Gulf's surface.

"We will attempt to pull it free and we are prepared to apply up to 80,000 [pounds] of force in addition to the weight of the blowout preventer to lift it," said Allen, the man charged with the government response to the oil disaster. "We call this the gentle tug."

After the relief well intercepts the well, it will take another few days to permanently seal the well with mud and cement

from below in what's called a "bottom kill" procedure.

Allen had warned Friday that changes in weather could result in a change in schedule. Last week, the operation was delayed as engineers tried to fish out pieces of drill pipe stuck inside the blowout preventer.

Officials have said the blowout preventer failed when the Deepwater Horizon drilling rig exploded April 20, killing 11 people and causing oil to gush into the Gulf of Mexico, leading to one of the worst environmental disasters in U.S. history.

Authorities from a Justice Department evidence recovery team will be on site during its removal, Allen said.

The well has been capped since July 15, and no new oil is flowing into the Gulf.