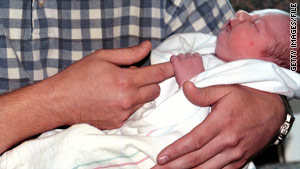 The U.S. birth rate has been declining since the start of the economic downturn in late 2007.
STORY HIGHLIGHTS
RELATED TOPICS

(CNN) -- The number of babies born in the United States dropped 2.6 percent last year, according to a recent study, the latest in a long list of falling indicators.

The birth rate, which takes into account changes in the population, fell to 13.5 births for every 1,000 people last year, from 13.9 births in 2008, and 14.3 births in 2007, according to a new report from the National Center for Health Statistics.

The news is not surprising, said Andrew Cherlin, a sociology professor at Johns Hopkins University, given the sad state of the American economy right now.

"The birth rate is falling because of the Great Recession. When people are unsure of their financial future, they tend to postpone having children," Cherlin told CNN.

"It's stronger now than in the last couple of recessions because this is a stronger recession," he added.

The U.S. birth rate has been declining since the start of the economic downturn in late 2007. When the economy picks up, so should births, said Cherlin, though he stressed it will take time for people to feel secure again.

Some of the women postponing having children now will have them later, Cherlin said, while others never will. During the Great Depression in the 1930s, roughly 20 percent of women never had children -- a percentage that Cherlin predicts the United States will hit again.

"I think it's likely to be a few years before this turns around," said Cherlin.