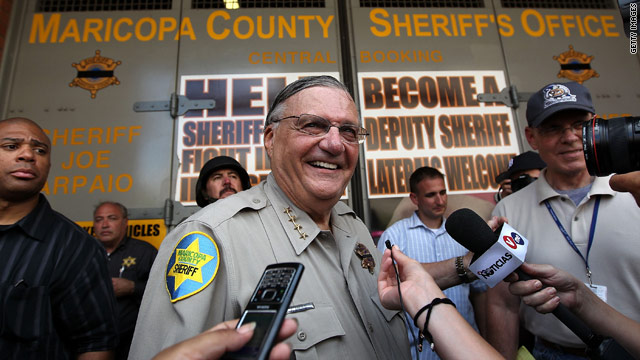 (CNN) -- Sheriff Joe Arpaio of Maricopa County, Arizona, is challenging the Justice Department's request for certain documents in its investigation of alleged civil rights violations by the sheriff's office.

In a letter to the Justice Department on Friday, Arpaio's lawyer said the sheriff couldn't agree to the department's September deadline to supply all documents requested for its investigation and questioned the government's pursuit of broad access to documents, personnel and facilities in the inquiry.

The letter, from sheriff's office attorney Robert Driscoll, alleged that the Justice Department's position that it is "entitled to any document it wants, to access any facility it wishes, and to interview any witness it wants, without limitation ... is simply unreasonable."

Authorities are investigating whether Arpaio's policies and law enforcement sweeps discriminate against Hispanics.

Justice Department officials met Tuesday with Arpaio and his lawyers to request additional documents in the investigation. The department formalized the request in a letter to the sheriff's lawyers Wednesday.

The letter asked the sheriff's office to send confirmation Friday that it would deliver the documents by September 10.

In his letter to the Justice Department on Friday, Driscoll pushed back on that deadline, saying "we did not agree to a September 10, 2010 deadline at our meeting, and we cannot agree to one now.

"As I am sure you are aware," the letter continued, "MCSO [Maricopa County Sheriff's Office] like many other state and local governmental agencies, has limited resources which cannot be deployed indiscriminately without a potentially negative impact on MCSO's ability to perform its primary functions of enforcing the law and protecting the citizens of Maricopa County."

On Saturday, a Justice Department spokesman said the department expects to receive the documents on time, despite the Friday letter.

"We're reviewing the letter," spokeswoman Xochitl Hinojosa said in a statement, "but as we have said all along, we expect the sheriff's office to provide nothing short of full compliance with the law, as every other law enforcement agency in the country has done in similar circumstances."

If it doesn't turn over the documents, the government has threatened to sue the sheriff's office "to compel access to the requested documents, facilities and personnel," Assistant Attorney General for Civil Rights Thomas Perez has said.

Arpaio, who has called himself "America's toughest sheriff," is known for his hard-nosed opposition to illegal immigration.

Detractors accuse him of discriminating against Hispanics. Supporters say the Justice Department's civil rights probe and its separate criminal investigation are politically motivated.

"I must say I was surprised at the apparent lack of command that any members of the DOJ team had over these documents," Driscoll wrote, referring to the Tuesday meeting. "Indeed many of the items your team claimed to need are among those documents that the DOJ has and has had for quite some time."