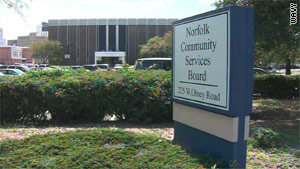 (CNN) -- A worker was paid for 12 years without ever showing up for work at a Norfolk, Virginia, agency funded by federal, state and local money, officials say.

Norfolk Mayor Paul Fraim told CNN on Friday that when a new director took over at Norfolk Community Services Board recently, she was "doing her due diligence" when she discovered the hooky-playing employee was on the books. The director, Maureen Womack, then notified the city attorney's office, Fraim said.

Sandy Johnson, a spokeswoman for the Community Services Board, told CNN Friday that her agency couldn't comment because of the ongoing investigation.

It added, "The city attorney has undertaken a detailed investigation of the circumstances and history of this matter to determine what further personnel actions should be taken, and the board of the NCSB passed unanimous motions supporting the executive director in any further employment actions she might take on the advice of counsel. After all necessary employment actions are taken, the city attorney will turn the matter over to Norfolk's Department of Police for further investigation."

CNN affiliate WAVY said that the employee, a woman whose name was not released, "earned" somewhere between $300,000 and $480,000, not including full benefits, from the board over the past dozen years.

The Norfolk board is partially funded by the Virginia state Department of Behavioral Health and Developmental Services. According to the department's website, it is one of 40 locally run community services boards that "serve children and adults who have -- or who are at risk of -- mental illness, serious emotional disturbance, intellectual disabilities, or substance use disorders."

The mayor said state law requires cities, towns and counties throughout Virginia to host the boards, but each city has little involvement beyond providing some of the funding for the offices.

"This is not a city employee. She does not work for the city, does not get a city check," Fraim said. He added that while the Norfolk City Council appoints members to the Community Services Board, the board hires its own director and is autonomous and independent.

The city of Norfolk provides just under $4 million of the local board's budget a year, Fraim said. Meghan McGuire, a spokeswoman for the Department of Behavioral Health and Developmental Services, said the state pays $9.7 million annually and the federal government usually contributes $2.4 million, but this year added $190,000 in stimulus funds.

Fraim expressed concerns about a lack of oversight at the agency.

The Norfolk Community Services Board is a "quasi-federal, state and local agency that operates independently," he said. "No one really judges their performance, if you will. It's not a good model."

McGuire said there is some state oversight. Each board is required to commission an independent annual audit, then send a copy of that audit to the state. A state auditor then looks for red flags and prioritizes the reports by risk level, she said.

"Recent audits of Norfolk showed low risk and no need for our department to conduct our own audit," McGuire said. "We don't have an employee-employer relationship with them, but if we do find out about a situation or something that needs to be investigated ... we can investigate through our internal audit process."

Norfolk City Councilman Barclay C. Winn commented on the situation Friday, saying, "We could have and should have done more in this case, but I think when you get an audited financial statement at the end of the year and a clean opinion, it gives you some level of comfort."

He added that government at all levels, including his, needs to be held accountable.

"I'm sure the mayor and city manager will get to the bottom of it, [but] the buck stops with the city council," Winn said. "If it has the word 'Norfolk' in it, it stops with us. ... That's OK. That's part of the job."

But that withholding of cash seems unlikely in this case. McGuire said that "it appears CSB is working diligently to resolve this issue."

George Pratt was the Norfolk board's executive director for 12 years, with a short gap between his and Womack's tenure. Even though his time in charge overlapped with the alleged shirker for about a decade, Pratt told CNN on Friday, "I know nothing about it. I read it in the paper."

Pratt added that no one had called him to ask about the situation and that "whatever the investigation is, they have not informed me of any details."

When McGuire was asked how a person who got paid for not working could have escaped detection for so long, she said she was unsure.

"We don't know at this point how something like this can happen. We're very concerned," she said. "[We're] working on procedure to prevent this from happening again."

Smigiel said that when he recently met with a city auditor, he was told about a shelved proposal that predated him, calling for a hotline that Norfolk city workers -- and workers at Norfolk-affiliated agencies such as Community Services Board -- could call confidentially to report fraud or any other ethical issues. He said the city council has now "technically endorsed" the idea and is working on an ordinance to implement the plan, with the hope that such a fix "probably would have caught something like this."