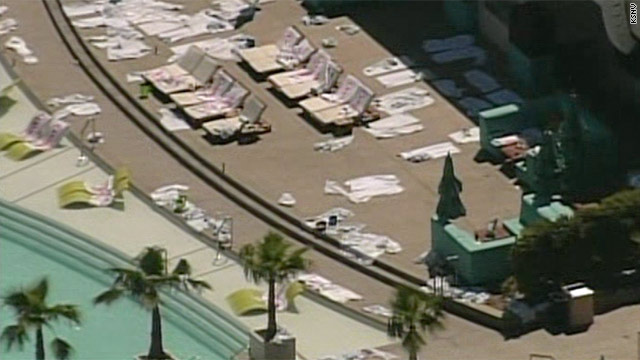 Rumpled towels sit on abandoned lounge chairs after the pool area at the MGM Grand was evacuated Friday.
STORY HIGHLIGHTS

(CNN) -- A chemical leak in the pool area of the MGM Grand Hotel in Las Vegas, Nevada, sickened as many as 100 people Friday, sending 12 of them to local hospitals, according to a spokeswoman for Clark County.

It was not immediately clear what kind of chemical was responsible for the fumes, which caused some of the hotel's guests to have difficulty breathing, said Clark County spokeswoman Stacey Welling.

About 200 people were evacuated from the area, Welling said.

Video of the hotel's large pool deck showed the area abandoned Friday afternoon, with rumpled towels still sitting on many lounge chairs and beachballs floating in the water.

As many as 100 people reported difficulty breathing, Welling said, but the 12 patients transported for medical care were all conscious and breathing on their own, she said.

The MGM's pool complex is made up of five swimming pools and three whirlpools, according to the hotel's website. CNN affiliate KLAS reported that the fumes originated in the complex's Lazy River area.