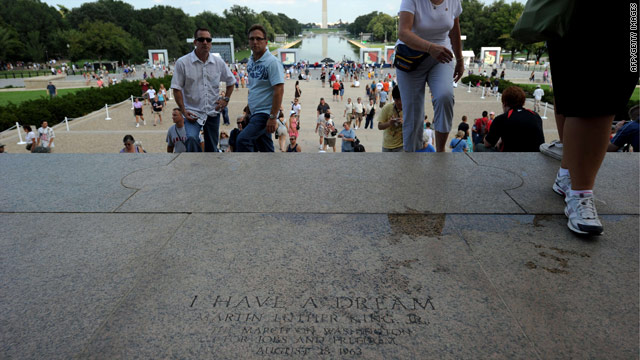 Washington (CNN) -- The planned large rally by Fox News Channel and radio talk show host Glenn Beck on Saturday on the National Mall is causing controversy because of its location and timing.

Saturday is the 47th anniversary of the Rev. Martin Luther King Jr.'s "I Have a Dream" speech, and Beck's rally will be in front of the Lincoln Memorial, where the civil rights leader delivered his historic address.

Beck, a hero to many conservative voters across the country, says that the mission of the rally is to honor American troops and that the event is nonpolitical.

A news release for the "Restoring Honor" rally says "this non-political event benefits the Special Operations Warrior Foundation and pays tribute to America's service personnel and other upstanding citizens who embody our nation's founding principles of integrity, truth and honor."

Tea Party activists from across the country are expected to attend, and former Alaska Gov. Sarah Palin, a Fox News contributor, is expected to have a prominent speaking role.

"Tea Party Patriots, our national coordinators, are going because our supporters from around the country by the thousands are going to be there tomorrow for this event," Tea Party Patriots National Coordinator Jenny Beth Martin said Friday on "CNN's American Morning."

Beck has been heavily promoting the event on his Fox program and on his radio broadcasts, and he says that the timing of the event wasn't intentional.

"It was not my intention to select 8-28 because of the Martin Luther King tie. It is the day he made that speech. I had no idea until I announced it," Beck said on his radio show in June, soon after the announcement of the rally.

"Whites don't own Abraham Lincoln. Blacks don't own Martin Luther King. Those are American icons, American ideas, and we should just talk about character, and that's really what this event is about. It's about honoring character," Beck said Thursday on his Fox program.

Also speaking at the event will be Alveda King, a niece of the late civil rights leader.

While the NAACP put out a cautious statement regarding the rally, there has been plenty of criticism of the event.

"It's offensive because it's out of line with the fact. It's out of line with the truth. The reality is that the conservative movement in America historically has always opposed expansion of civil rights for all kinds of people," Michael Fauntroy, an assistant professor of public policy at George Mason University, said Friday on CNN's American Morning.

Expect a lot of debate over the size of the crowd.

While the National Park Service long ago stopped giving crowd estimates for events along the National Mall, organizers of the rally are putting out predictions. Brendan Steinhauser, director of state and federal campaigns for FreedomWorks, which has been helping to organize the event, predicts a crowd of 250,000 or more. He thinks the crowd will fill up the Lincoln Memorial area, the reflecting pool and reach the area by the National World War II Memorial.

FreedomWorks is a nonprofit organization that helps train volunteer activists and provides some of the organization behind the Tea Party movement, including last year's 9/12 taxpayer march on Washington.

"FreedomWorks has been sharing our logistical notes from organizing the huge 9/12 Taxpayer March on Washington in 2009 with Glenn Beck's staff," Steinhauser said. "They are doing the heavy lifting on the 8/28 event, and we've tried to be as supportive as possible in terms of promotion, sending volunteers their way, helping them navigate the bureaucratic obstacles to doing events in Washington, and most importantly, turning out FreedomWorks members for the weekend's events."

One hour after the start of the Beck rally, NAACP President and CEO Benjamin Todd Jealous will join the Rev. Al Sharpton and his National Action Network and other civil rights leaders in a mass rally just a few miles away. Education Secretary Arne Duncan is also participating.

But a top House Democrat charges that Beck's claim that the rally is nonpolitical is nonsense.

"It's blatantly political," Rep. Chris Van Hollen of Maryland, the chairman of the Democratic Congressional Campaign Committee, said at an appearance Friday at the National Press Club. "I mean, come on. You have seen Glenn Beck and a lot of the talk show hosts on Fox News out there talking about this election for the last 15 months since the day President Obama was elected president."

"You've had a constant tirade against the president, against Democratic efforts to get the economy turned around. Let's call it what it is. It's a blatant political effort."