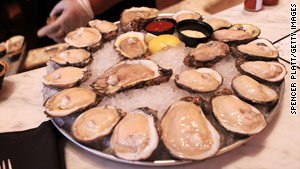 (CNN) -- Federal and state experts have declared Mississippi oysters safe to eat after the oil spill that gushed for months in the Gulf of Mexico.

The state's oyster season is closed during the summer and reopens in September or October.

"Like all the seafood samples collected and tested from Mississippi territorial waters since the Deepwater Horizon oil spill, our Mississippi oyster tissue samples have undergone rigorous testing, and have been proven to be well below levels of concern for hydrocarbons," said Dale Diaz, fisheries director for the state Department of Marine Resources.

The agency conducted the tests with the state Department of Environmental Quality, the National Oceanic and Atmospheric Administration, and the U.S. Food and Drug Administration. The report was released Wednesday.