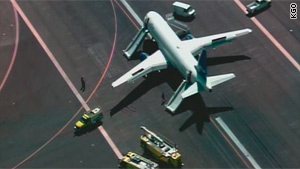 Passengers used the plane's emergency slides to exit the aircraft after the hard landing.
STORY HIGHLIGHTS

The Airbus A320 had 86 passengers and a crew of five aboard when it touched down at Sacramento International Airport, the airline said.

The plane was arriving from the Los Angeles, California, suburb of Long Beach at 12:50 p.m. when a tire began smoking or possibly even caught fire, the FAA said.

In a statement issued after the incident, JetBlue said the crew of Flight 262 reported problems with the jet's brakes and "elected to evacuate the aircraft in an abundance of caution."

Passengers piled out using the emergency slides as fire crews and paramedics rushed to the airliner's side.

Jonathan Burgess, a spokesman for the Sacramento Fire Department, said 14 people complained of being hurt, with four of those taken to hospitals with minor injuries.

The incident forced the airport to close one of its two runways, but the airport remained open, spokeswoman Cheryl Marcell said.