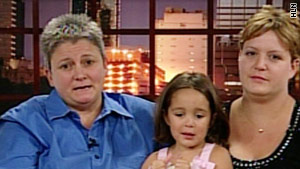 (CNN) -- A private religious school in Texas has denied admission to the daughter of a lesbian couple who wanted to enroll the child in preschool, citing its "clear teaching of the Christian faith" for the refusal.

In a statement e-mailed to CNN sister network HLN, the dean of St. Vincent's Cathedral School in the Dallas suburb of Bedford, Texas, said the school is standing on its principles "in matters of marriage and sex outside of marriage" by refusing to seat 4-year-old Olivia Harrison.

"St. Vincent's School as a ministry of St. Vincent's Cathedral upholds the clear teaching of the Christian faith, the Holy Bible, and the Anglican Church in North America," the Rev. Ryan Reed said.

"We based our decisions about enrollment on what is best for the children of St. Vincent's as a whole and in conformity with the above standards," he said. "We regret the disappointment the mother feels, but also do not understand why she would want to enroll her child in a school that would undercut her own personal values at home."

Olivia's mother, Jill Harrison, told HLN's "Prime News" that was fine with her.

"I absolutely would not want her to partake in a school where they did not believe or condone the relationship that we have together," she said.

St. Vincent's is part of a conservative movement that broke away from the U.S. Episcopal Church in 2008, in part over the Episcopal church's positions on gay and lesbian rights. The Anglican Church in North America claims about 100,000 adherents.

In a follow-up e-mail, Reed said that the school had no problem with a single mother, "lesbian or not, living chaste" -- but said St. Vincent's has taken a hard line in other cases. He said it has rejected an earlier preschool applicant who came from a gay household, fired an unmarried teacher who became pregnant and removed a man "from leadership roles in the school" after he left his wife for another woman.

She and her partner, Tracy Harrison, said the school appeared to have no problem with admitting Olivia until after they attended a recent parents' night at the school.

Tracy Harrison said she was raised in a strict Baptist home, she and her partner thought St. Vincent's could give Olivia a good education and impart "the basic Bible teachings ... follow the Golden Rule, the Ten Commandments, be kind to your neighbor."