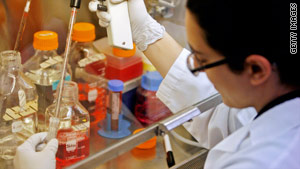 Washington (CNN) -- A U.S. district judge granted a preliminary injunction Monday to stop federal funding of embryonic stem cell research that he said destroys embryos, ruling it went against the will of Congress.

The ruling by Judge Royce C. Lamberth was a blow to the Obama administration, which last year issued guidelines to allow federal funding for embryonic stem cell research.

Monday's ruling involved a lawsuit against the National Health Institute filed by researchers opposed to use of embryonic stem cells, a group that seeks adoptive parents for human embryos created through in vitro fertilization, the non-profit Christian Medical Association and others.

The ruling stops the federal funding of embryonic stem cell research while the lawsuit proceeds through the legal system. The government can appeal the injunction, and a Justice Department spokeswoman, Tracy Schmaler, said the decision was being reviewed.

The field of embryonic stem cells has been highly controversial because the research process involves destroying the embryo, typically four or five days old, after removing stem cells. These cells are then blank and can become any cell in the body.

Some scientists believe embryonic stem cells could help treat many diseases and disabilities, because of their potential to develop into many different cell types in the body.

While some advocates praised the executive order as a giant step forward for medical research, conservatives groups objected, contending that the destruction of human embryos ends human life.

"Frequently people will say why are you opposed to stem cell research and of course are answer is, we're not," Stoddart said. "We're opposed to the destruction of the embryos to get embryo stem cells."

In a statement Monday, the Coalition for the Advancement of Medical Research said it was disappointed by the injunction granted "in response to the latest maneuver by an ideologically driven fringe group."

"We have full confidence that the extensive, deliberative process that shaped federal guidelines now in place will be upheld upon further review," the group's statement said.