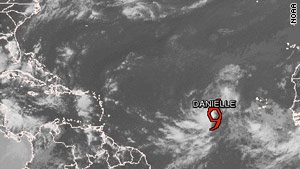 "Additional strengthening is forecast during the next 48 hours, and Danielle could be near hurricane intensity by late Tuesday," forecasters said.

Tropical storm-force winds extended outward up to 50 miles (85 kilometers) from the center, the hurricane center said.

Tracking maps show the storm remaining out to sea and not nearing land through at least Friday. No coastal watches or warnings were in effect Sunday.

"If it were to approach the U.S. it would be a week away, but most models keep it at sea," CNN Meteorologist Jacqui Jeras said.

If Danielle develops into a hurricane, it would be the second of the season. Hurricane Alex sent thousands in northeastern Mexico to shelters in late June and early July.