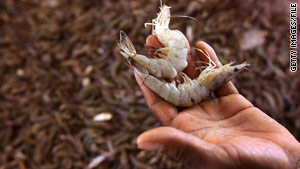 The industry is hoping shrimp caught now are bigger than the ones harvested early from the Gulf of Mexico in May.
STORY HIGHLIGHTS

(CNN) -- With Monday's start of the fall shrimping season came new worries about the Gulf of Mexico's seafood and the industry's ability to lure not only business but fishermen back in the water.

For the past few months, BP contracted with thousands of fishermen to help with the cleanup of oil from the sunken Deepwater Horizon rig. But officials said Monday that many fishermen had yet to jump back in the water to resume their livelihoods.

"Right now, part of our challenge is to get the shrimpers back in the water," said Harlon Pearce, chairman of the Louisiana Seafood Promotion and Marketing Board. "A lot of them are working for BP, and we're having trouble getting them back in the shrimping business.

"They're saying, 'If I'm sitting here at home on my couch getting a check [from BP], why should I go back to fishing?' " Pearce said. "But we need them to come back and do what they do best: fish."

The shrimping season was met with another ominous sign Monday. A dogged tropical weather system had looped back toward the Gulf Coast from inland Florida, threatening the catch before many boats had even begun trawling the riverbeds.

Evacuation plans were being discussed Monday morning, according to an enforcement official with the Grand Isle office of the Louisiana Department of Wildlife and Fisheries.

The day was crucial not only for the fishermen but for the "Louisiana seafood brand," said Ewell Smith, executive director of the Louisiana Seafood Board.

"For the past three months, we've been going backward," Smith said. Just the start of the shrimping season is "a major positive step for us."

Those charged with marketing the seafood industry have been hampered by not only the oil but skeptical fishermen who have fled the water in search of other ways to make a living.

On Sunday, shrimpers in Bayou Barataria, Louisiana, a small fishing community near the coast, didn't see the steady stream of boaters that normally accompany the start of the season.

Carol "Moose" Schieffler, who makes nets for trawlers, told CNN affiliate WVUE that the real impact of the oil may not be apparent until the next generation of shrimp.

"You gotta see what this spill did to the mommas and the daddies of the shrimp, and if we don't have no mommas and daddies, you know, 300 or 400 foot of water out there to lay their eggs post-larva to come in for next year, well, there ain't gonna be no shrimp," Schieffler said.

Despite the perception of risks associated with Gulf Coast seafood, alternatives to it often are not as stringently regulated, according to nonprofit food safety watchdog group Food & Water Watch.

Pearce, of the Louisiana Seafood Board, said that although it's too early to tell whether the shrimp season will be a success, the cooperation of the state, federal agencies and BP would make the difference.

"We need to do something to jump-start our fishermen," Pearce said.