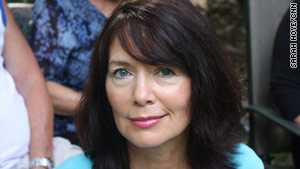 Victoria Switzer of Dimock, Pennsylvania, is among those who registered to speak at the postponed hearing.

Philadelphia, Pennsylvania (CNN) -- The U.S. Environmental Protection Agency is on the hunt for a new location to hold its final public hearing on a planned study of hydraulic fracturing, the controversial process used to extract natural gas from underground, agency officials say.

"We wanted a central location and wanted to keep it in the area where the drilling has been proposed. We're leaving no stone unturned," said agency spokeswoman Betsaida Alcantara. "We are pushing to make an announcement as swiftly as possible."

In July, public hearings were held in Fort Worth, Texas; Denver, Colorado; and Canonsburg, Pennsylvania, to help determine how the EPA will conduct the study.

A final public hearing was slated for Thursday at Binghamton, New York, but on Monday it was rescheduled for Saturday in Syracuse, New York, and on Tuesday it was postponed indefinitely, agency officials said. About 1,800 people had registered to speak for two minutes each, Alcantara said.

Both of the proposed venues, Binghamton University and Syracuse's Oncenter Complex, expressed concern about hosting an event estimated to attract 8,000 people.

"The last-minute change to Syracuse was caused by Binghamton University taking several actions to dissuade the EPA from holding the meetings at its campus, including increasing the cost from $6,000 to almost $40,000," the EPA said in a statement Tuesday.

I've worked for EPA for a long time, I was here in the early '80s, this is a case that is unusual.
--Jeanne Briskin, EPA liaison on hydraulic fracturing
RELATED TOPICS

The university issued a statement putting the cost at $32,000, which it said included "all of the estimated operational costs that the university believed it would incur in order to ensure that activities associated with these meetings would be carried out in a safe and orderly manner."

The EPA now is planning to hold the meeting in September at a location in upstate New York that will be announced as soon as it is confirmed, Alcantara said. The meeting is open to industry stakeholders and the general public.

Victoria Switzer, who registered to speak at Thursday's hearing, is among 15 residents of the northeastern Pennsylvania township of Dimock who filed suit in November 2009 against Cabot Oil & Gas Corp., alleging it contaminated their well water. Cabot solicited Switzer for a gas lease in 2006, according to court records.

Changing the location and then postponing the meeting was upsetting but did not come as a total surprise, Switzer said.

"I had a feeling it was going to be big, but it's absurd," she said.

"Who's leading this pack?" asked Switzer, a former schoolteacher. "I am against drilling as it's going now. They need to step back, call a moratorium and do some serious geological studying."

Julie Sautner of Dimock planned to attend the EPA meeting with her husband, Craig, a cable splicer, and 17-year-old daughter Kelly. They also are a part of the lawsuit.

"We might seem small, but we're here, too, and we're fighting the industry not to pollute, and were fighting for the future generations," said Sautner, who added she has been unable to use her well water for nearly two years. "We're not mad at anybody but we're stuck here."

The EPA announced in March that it would study the potential adverse impact that hydraulic fracturing may have on drinking water, human health and the environment, agency officials said.

"People have raised important concerns that require our attention," said Jeanne Briskin, EPA liaison on hydraulic fracturing from the agency's the Office of Research and Development. "I've worked for EPA for a long time, I was here in the early '80s, this is a case that is unusual."

Hydraulic fracturing is used by gas producers to stimulate wells and recover natural gas from sources including coalbeds and shale gas formations, said Briskin. The process requires the injection of fluids -- generally water and chemical additives.

"We need to have a baseline to get an idea of what the effects of that are, and if you're doing monitoring you have to know what to look for," she said. "At the federal level there is no requirement that companies have to tell us what they use and what concentrations."

The EPA plans to complete the study design by September 2010, begin the study in January 2011 and release initial results by late 2012, she said.

"This is an expedited process; it usually takes longer," Briskin said of the timeline. "As we get results, we're going to be reporting them."