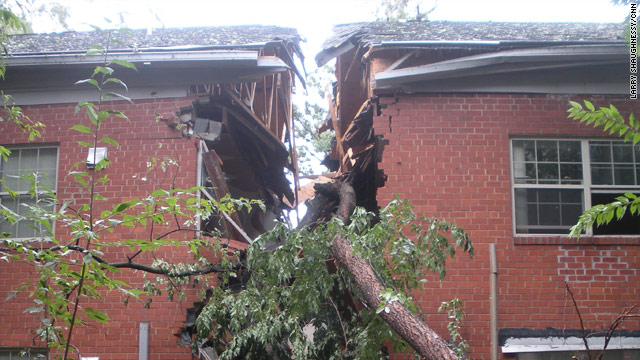 The 80-foot tree sliced the top of the three-story building in half. It landed in a shared stairwell and not living quarters.
STORY HIGHLIGHTS

One of the worst-hit places was an apartment building in the old town section of Gaithersburg, Maryland. An 80-foot-tall tree fell onto a three-story building, slicing the top of the structure in half.

"They were very lucky," Montgomery County Fire Chief Richard Bowers told CNN. The tree landed in a shared stairwell and not living quarters.

A child and three adults were taken to hospitals, but none of the injuries appeared to be life-threatening, he said. Ten to 12 others were treated on the scene for cuts and bruises.

Three people had to be rescued by the Montgomery County Urban Search and Rescue team.

After K9-unit dogs went through the building to make sure it was safe, firefighters were sent in to make sure no one was trapped inside, Bowers said.

At least 12 units are uninhabitable because of damage or blockage by trees, he said.