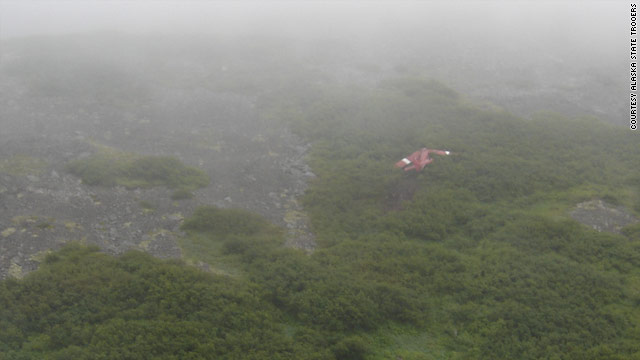 Former Sen. Ted Stevens' plane came to rest on a steep slope, its wings lying beside the fuselage.
STORY HIGHLIGHTS

(CNN) -- Alaska Air National Guard Rescuers had to slog for hours through rain, fog and wind to reach the site of the plane crash that killed former Sen. Ted Stevens and four others near Dillingham, Alaska.

As the first helicopter reached the scene about 7 a.m. Tuesday -- after flying four hours from another crash site and refueling in midair -- the wreckage of the red single-engine vintage plane emerged from the mist, lying on a 40-degree slope.

"There was a scar on the hillside where it impacted and skidded up the hill. That was probably about 75 yards long," said Senior Master Sgt. Jonathan Davis of the Alaska Air National Guard.

"As we approached the aircraft you could smell the fuel. The wings were swept back. The engine compartment of the plane had broken off or buried itself in the ground."

Conditions at the scene were so hazardous that helicopters couldn't land; rescuers had to be winched to the ground, Technical Sgt. Krisofer Abel said.

"The fuselage itself was surprisingly intact, and that's where all of the survivors and everybody else were located," Abel said.

Eric Shade, a civilian pilot who searched for the crashed DeHavilland DHC-Z3T Otter, said the front of the aircraft apparently was sheared off.

"It was pretty smashed," he said. "The wings were laying beside the fuselage upon each side, and I couldn't see the floats; the floats were underneath it.

"I couldn't see anything in the front of the airplane. From the window forward, the cowling and everything was gone. The main fuselage and the tail was in one piece, but the wings were off and I couldn't see the engine. I didn't think it was survivable."

Killed in the crash, in addition to Stevens, were pilot Theron "Terry" Smith, 62, of Eagle River, Alaska; lobbyist William "Bill" Phillips Sr., of the Washington area, the father of Willy Phillips; GCI executive Dana Tindall, 48, of Anchorage, Alaska; and her daughter Corey Tindall, 16.

Private pilots in the area spotted the plane first and gave authorities its location. Individual "good Samaritans" were able to reach the site and tend to the survivors overnight until rescuers arrived in the morning, said Maj. Gen. Thomas Katkus, adjutant general of the Alaska National Guard.

The area was so rough and rocky that a physician was dropped in 1,000 feet from the site and had to hike in , National Transportation Safety Board Director Deborah Hersman said Tuesday.

Five volunteers, including some with medical training, assisted and stabilized the survivors overnight, officials said. One of the survivors was outside the fuselage when the doctor arrived.

"There was a lot of selfless work that was done last night, and there were a lot of people who were applying their skills and also supporting those individuals who were trapped on the hillside," Hersman said.

"Obviously we don't know what would have happened if they had not been there, but we thank the Lord that they were."

Inside the aircraft "it's a jumbled mess, and wet ... fuel smell," Abel, the technical sergeant, said.

"The volunteers who'd gotten there and spent the night were frazzled," he said. "They were wet and dirty and tired themselves. They had been treating these guys overnight."

CNN's Casey Wian and Patrick Oppmann and the CNN Wire staff contributed to this report.