In the Gulf, scientific questions still lurk beneath the surface 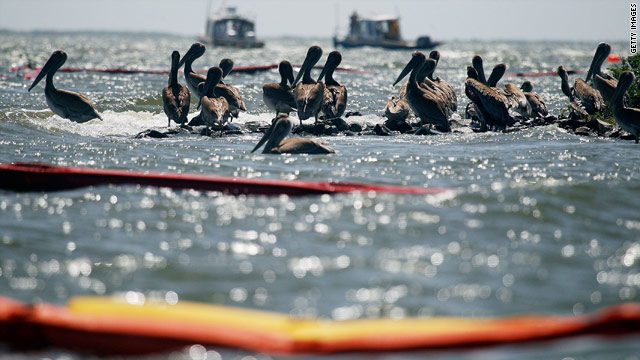 (CNN) -- When Ed Overton looks at the remains of what's happened to the Gulf of Mexico over the past few months, he sees a stale, unsolved crime scene.

The oil has stopped leaking. The damage is largely done, he says. But what exactly happened?

"We can see the beaches; we can see the dead animals; we can get a count on turtles and whales and all this stuff -- and all of that is eye-level observation," said Overton, a professor emeritus at Louisiana State University and a veteran of oil-spill science.

It's a frustrating explanation, but more than 100 days after oil started spewing into the Gulf of Mexico, scientists say it's still too soon to judge the severity of the damage that's been done to the environment -- this despite recent evidence about the scope of the spill, which, according to BP, has been all but stopped at this point.

Last week, the U.S. government estimated the size of the oil leak at about 5 million barrels, making it the largest spill of its kind in history. The government also released an "oil budget," which says at least half of the oil that was released has been burned, skimmed, siphoned or evaporated out of the ecosystem. The rest, the report says, has been diluted into the ocean, dispersed by chemicals or is just plain missing.

Pundits, politicians and scientists have tried to use this information to varied ends.

But, despite the speculation, scientists say data published to date don't give nearly the full picture about the long-term impact.

"What really matters is not the oil budget, but the ecological budget," said Lisa Suatoni, a senior scientist at the Natural Resources Defense Council.

Some blanks in this "ecological budget" have been penciled in.

The government has published some data about the extent of the visible damage -- like the deaths of large, oil-soaked birds and the fact that oil has run up into marshes.

As of August 5, the government reported collecting a total of 3,606 dead birds, 508 dead sea turtles and 67 dead mammals from the Gulf. Further tests will be done to determine whether those animals were killed by the spill. Some were reported with visible oil on their bodies, but others were simply found in an area of the Gulf where they may have been affected by the oil.

The oil's impacts on coastal marshes, which are above the surface and accessible from land, are somewhat well-documented, too.

Between 100 and 200 square miles of Louisiana's marshy coastline -- a small percentage of the total area -- has been oiled, according to news reports.

The Obama adminstration says 649 miles of the Gulf shore is currently oiled. That number includes beaches as well as wetlands.

What's going on beneath the surface, and out of sight, is another story.

Researchers are looking into sub-sea issues caused by the oil, but much less information has been released on the matter.

Steve Murawski, chief scientist for the fisheries program at the National Oceanic and Atmospheric Administration, said the effects on future generations of fish and marine mammals may prove to be more important in the long term than the carcasses found so far.

His agency is collecting samples of fish larvae and plankton to see what the next generation of creatures in the Gulf will look like.

If the larvae of a vulnerable fish species like the bluefin tuna are completely wiped it, it may not matter that many of the adults appear to have survived.

"We're going to see if we have a missing generation," he said.

None of that data have been released yet, but likely will be in the coming month, he said.

Scientists are also looking into systemwide problems that could result from the disaster.

It's still a possibility that oil could worsen the pre-existing, oxygen-free "dead zone" in the Gulf, which is known to cause massive fish kills.

And others worry deep-water dead zones could develop as bacteria chew on the oil and, in the process, deplete the oxygen that's available to other organisms.

Some preliminary tests indicate such a zone is dissipating near the source of the once-leaking BP well, a mile beneath the surface, Murawski said.

He said the test results are "spotty," but that oxygen levels are generally high enough to support life and that the zone is isolated and getting smaller.

Samantha Joye, an oceanographer at the University of Georgia, has said that her preliminary tests show there was evidence of a low-oxygen zone beneath the surface.

"It certainly isn't safe to conclude there is no oxygen problem, based on oxygen measurements that are made close to the spill site," Joye told reporters on a conference call in mid-July, according to news reports.

Millions of dollars have been dibursed to independent researchers studying the effects of the spill, but so far no formal scientific papers have been published, according to Murawski, from NOAA, and Suatoni, of the NRDC.

The National Science Foundation so far has funded $6.9 million in independent research projects to study the ecological impacts.

And BP in May pledged $500 million for independent research, of which only $30 million has been allocated so far, said Rita R. Colwell, a University of Maryland professor who chairs the independent panel managing those funds.

Environmentalists say the independent research is especially important because so much public research data may be tied up in litigation.

The federal government is evaluating the full environmental impact of the spill as part of a requiredNatural Resource Damage Assessment -- or "nerda," as scientists say.

But some of the data it's collecting are kept private so as not to spoil any possible litigation with BP, said Ian MacDonald, an oceanographer at Florida State University.

MacDonald, along with other oceanographers and a few environmental groups, sent a letter on August 3 to U.S. Attorney General Eric Holder and the head of BP, Robert Dudley, urging them to release all of the data.

It's not just a matter of principle; the data are needed so efforts to mitigate the effects of the spill can proceed thoughtfully, the scientists say.

MacDonald said billions of dollars must be allocated to studying the ecological impacts of the spill, particularly because of its unprecedented scale.

Murawski, from NOAA, said most environmental research collected by the government is being made public as it is processed, and that only some data about the economic impact of the spill are being kept private.

"We're tying to put as much of the basic information out there as we can," he said.

The federal "oil budget," which has resulted in much speculation on the severity of the oil disaster, has also been criticized by some independent scientists who say the administration wants to put a positive spin on the situation.

"It's not science. I'm sorry. This is an estimate," MacDonald said. "They may be derived scientifically, but this hasn't been reviewed by peer review and the actual numbers are not there."

Of the dispersed and dissolved oil that's still in the Gulf, he said: "It hasn't disappeared. It's in the water. It's changed forms. We don't see it anymore, but it's still there."

The full picture of the damage may take decades to crystallize, said MacDonald, the FSU oceanographer.

Murawski said the government will be in the process of evaluating the environmental impact of the disaster for at least 10 years.

"It's not like a litmus test, where you can dip a piece of paper in the Gulf and say, 'Oh the fish are back,'" she said.

Even above-the-surface problems, such as in the marshes, are more complicated up close. While it's clear the marshes in Louisiana have been heavily hit with oil, it's not known how resilient they will be, said Murawski.

Researchers are conducting surveys now, he said, to see how much marsh has died and suffocated because of the oil, and what might turn into green shoots soon.

In the absence of hard science, experts say it's best to turn to history for a template of how environmental damage comes into focus.

The environmental legacy of the 1989 Exxon Valdez oil spill off the coast of Alaska took more than 20 years to unfold. Two decades after the spill, scientists made new discoveries that led them to estimate 21,000 gallons of the oil remained in the environment, some of it as toxic as it was when the spill occurred, according to a 2009 report from the Exxon Valdez Oil Spill Trustee Council.

The public should expect similar surprises with the Gulf oil disaster, saidPedro Alvarez, chairman of civil and environmental engineering at Rice University.

"You only realize what the damage was years, years later," he said.

Another historical example may be more reassuring. In 1979, a reported 3.3 million barrels of oil spewed into the Gulf of Mexico in theIxtoc 1 oil disaster.

Today, visible impacts of that disaster have disappeared, Overton said.

Overton predicts something similar will happen with the BP Gulf oil disaster. In coming years, the scope and severity of the environmental damage will come into focus. Within decades, the ecosystem may return to a new normal.

But anyone who makes predictions these days is just speculating, Overton said.