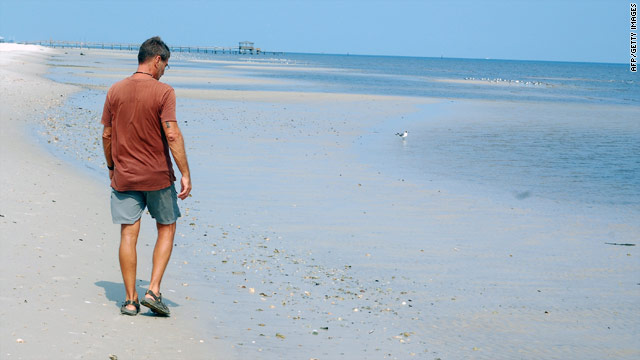 Though the beach has been cleaned up, Clarence Barthel walks alone at Pass Christian, Mississippi, on August 4.
STORY HIGHLIGHTS

(CNN) -- The undersea gusher in the Gulf of Mexico has been brought under control, but the worst oil spill in U.S. history will continue to be felt along the Gulf Coast for some time, Obama administration officials said Sunday.

A report from the National Oceanographic and Atmospheric Administration last week found three-quarters of the oil spilled between late April and mid-July has been collected, dispersed or evaporated. But Allen said, "We need to keep a steady hand at the tiller to keep the cleanup going."

And White House environmental adviser Carol Browner told NBC's "Meet the Press" that the "first phase" of the disaster was over -- but it is "not the end by any means."

The well erupted after an April 20 explosion aboard the drilling rig Deepwater Horizon that left 11 men dead. A temporary cap contained the spill on July 15, and nearly 3,000 barrels of heavy drilling mud and cement drove the well back into the ocean floor last week.

The final step -- the completion of a relief well that will permanently seal the blowout from below -- is expected to be completed sometime between August 13 and 15, Jim Lestelle, a spokesman for the relief effort, reported Sunday. Lestelle said the rig drilling the relief well was within the final 100 feet of intercepting the blown-out bore.

The spill inflicted heavy blows on gulf Coast industries like tourism and fishing, but Allen said some parts of the region are beginning to see a recovery.

"It's starting to happen already, but it's happening incrementally, where the oil is not there now, where we've cleaned it up," he said. "Some beaches are reopening. Fisheries are reopening. And that will happen as soon as we can, either by cleaning up the oil or having the areas tested through NOAA and FDA for seafood safety and so forth."

"There's a lot of clean-up working going on here, and that's excellent," Maura Wood, of the National Wildlife Federation, told CNN last week. "But the tide keeps coming and going each and every day."

Federal authorities say up to 1 million barrels of oil may still lie beneath the surface of the Gulf. Browner said cleanup crews from the government and well owner BP fought to keep the oil out of beaches and coast marches, but what did reach shore "has to be cleaned up."

"Some of it may continue to come on shore, the residual. It'll come on in tar balls and tar mats, and that can be cleaned up," Browner said. In addition, she said scientists are examining marine life in the Gulf, "and right now nobody is seeing anything of concern."