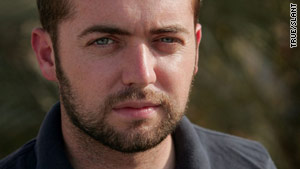 Journalist Michael Hastings won't be allowed to embed with a military unit in Afghanistan, the Pentagon says.
STORY HIGHLIGHTS

"Embeds are a privilege, not a right. The unit decided they didn't feel the trust necessary for an embed. They declined," Pentagon spokesman Col. David Lapan said, not specifying which unit was involved.

Michael Hastings, the reporter, said via Twitter that his embed had earlier been approved, then was "disapproved."

McChrystal's illustrious career came to an abrupt end when he resigned after he and his staff were quoted in a Hastings article criticizing and mocking key Obama administration officials.

The Army is investigating the circumstances that led to the article, an Army spokesman told CNN Wednesday.

"A four-star commander was relieved ultimately due to this article. We want to understand what happened here," Col. Tom Collins said.

He declined to answer questions about the scope of the review or who was being interviewed, because the investigation is ongoing.

It is widely believed that McChrystal, as well as his closest aides, either may have already been interviewed or will be by the inspector general regarding comments in the article that could be considered denigrating to the president.

McChrystal himself, however, is not expected to be a target of the investigation as the president has already said he did not fire the general "out of any sense of personal insult."

Obama said he was making the decision because the tone of the remarks made in the article "undermines the civilian control of the military that is at the core of our democratic system."

Under the code of military justice, it is illegal to make disrespectful remarks about the president, but the inspector general's investigation is not a criminal one.

The investigation was formally ordered by Army Vice Chief of Staff General Peter Chiarelli, who is responsible for disciplinary matters in the Army.

Several Defense Department officials contacted by CNN said they had been unaware of the investigation until it was reported this week by the Associated Press.

Hastings, the Rolling Stone reporter, is not cooperating with the investigation. He said on Twitter he "refused to participate."

Obama tapped McChrystal in June 2009 to be the top commander in Afghanistan.

The general was known for his discretion and keeping the media at arm's length, a perception that was shattered when the infamous Rolling Stone article came out in June.

McChrystal did not directly criticize Obama in the article, but reporter Hastings writes that the general and Obama "failed from the outset to connect" after the president took office.

Sources familiar with their first meeting said McChrystal thought Obama looked "uncomfortable and intimidated" by the room full of top military officials, according to the article.

The journalist wrote that an unnamed aide to McChrystal mocked Vice President Joe Biden. McChrystal did not deny the article's accuracy. In a statement, he called the comments "a mistake" and apologized for "poor judgment."

He retired June 23 and was replaced by Gen. David Petraeus, who was previously the top commander in Iraq.