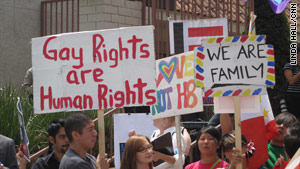 Proposition 8 sparked numerous rallies, including this one in Los Angeles, California, on May 26, 2009.
STORY HIGHLIGHTS

Q: What happens next?

A: The losing side hoped the judge would immediately issue a stay to stop the ruling from going into effect until appeals are filed. The judge did just that by granting an immediate stay on the ruling.

Supporters of the voter-approved referendum in particular were concerned that if they lost, same-sex marriages could be performed before the judge rules on the stay request, which could take several weeks.

The next step will be for the losing side to file a "merits" appeal with the 9th Circuit U.S. Court of Appeals in San Francisco, asking it to essentially decide whether the judge's ruling was proper. Both those for and those against Prop 8 will probably ask this court to fast-track the case, that it be heard on an expedited basis.

Lawyers will argue on the larger legal questions in front of the three judges on the court, and then a written ruling will be issued. The losing side at this stage can ask an "en banc" panel of 11 judges from the court to hear the case.

The appeals court has no deadline in which to decide the constitutional questions, so the waiting game could drag on for many months.

Q: What will be argued?

A: This is a federal appeal over the impact created by a state referendum.

At issue is whether it violates the 14th Amendment's guarantee of "equal protection" and "due process." Such individual protections have often been used in cases of civil rights, such as school desegregation and voting.

Those against Prop 8 will say that marriage is a fundamental state-sanctioned right and that same-sex couples are being discriminated against when laws deny them that right. Prop 8 proponents have said that state legislatures and voters have the right to amend a state constitution on defining marriage and that their wishes must be respected by the federal courts.

Q: How does it get to the Supreme Court?

A: After the 9th Circuit court rules, lawyers have the option of asking the Supreme Court to intervene, likely the next step instead of the larger "en banc" panel.

The nine justices on the Supreme Court, unlike lower courts, have the discretion to deny hearing the case. In fact, only about 1 percent of petitions for certiorari -- which this appeal is labeled -- are accepted by the court for argument.

If the case is accepted, as would be expected, both sides will file a series of written briefs, oral arguments would be held, and then a written ruling is issued. The high court usually releases its rulings by June of the annual term that begins in October, within a few months at most of hearing a case.

Q: How long will it take to get there, given that this is a landmark case?

A: Depending on how long it takes the appeals court to decide how quickly to hear the case and then to decide the constitutional questions, it could be a year or two before the case reaches the Supreme Court.

Q: How might some justices look at the case?

A: A key question for the court will be how it views -- or how it believes the law views -- homosexuality.

The issue could come down to whether homosexuality is considered a "status" or "conduct."

Justice Ruth Bader Ginsburg, in an unrelated high court ruling in June, offered a clue to how she might decide the question. When talking about laws affecting homosexual rights, Ginsburg said, "Our decisions have declined to distinguish between status and conduct in this context."

What Ginsburg suggests is that homosexuality is a status, something courts have generally given greater legal protection, as an "identifiable class." But placing homosexuality in the "conduct" category would suggest that being gay is, at least in part, a choice and perhaps provide less constitutional protection.

It is a fundamental, landmark question: Do civil rights laws and the broad constitutional protection apply in the same-sex marriage context?

Assuming the high court membership remains the same over the next few years, the vote of Justice Anthony Kennedy will be key. A moderate conservative, he is the "swing" vote on this court, whose views on hot-button cases often are in harmony with more liberal colleagues.

Predicting how the court will ultimately rule is often futile, especially since the court is about to get its fourth new member in the last five years.