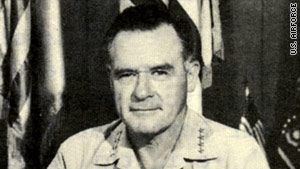 The Senate will have to vote to approve the promotion of Maj. Gen. John D. Lavelle.
STORY HIGHLIGHTS
RELATED TOPICS

Washington (CNN) -- The president nominates officers for important promotions all the time, but Wednesday, he nominated John D. Lavelle, a two-star major general, to be promoted all the way up to a four-star general. What makes this nomination different is that Lavelle died 31 years ago.

The story began amid the controversial Vietnam War, while Richard Nixon was president.

In 1972, Lavelle was a four-star Air Force general. But, according to the Pentagon and historical record, in April of that year, he was removed from command because of allegations that he ordered bombing missions into North Vietnam that had not been authorized.

Reports from 1972 said Lavelle advocated the bombing of radar sites in North Vietnam that were helping the enemy shoot down American pilots on missions.

Before Lavelle's orders to attack radar sites, the North Vietnamese had developed a more effective anti-aircraft defense system and had become very adept at targeting U.S. planes. Existing rules of engagement said the the American pilots couldn't attack the radar sites until the enemy attacked the Americans.

Lavelle also allegedly tried to falsify records about the missions by claiming the bombings were in response to enemy fire that never happened.

When the situation became public, it became the focus of much media attention, even making the cover of Newsweek magazine. The entire scandal was called the Lavelle affair.

Because of his actions and the alleged cover-up, Lavelle was demoted, lost two stars and retired a major general.

Then in 2007, 28 years after his death, once-secret tapes from the Nixon White House were examined. They showed that President Nixon did authorize Lavelle to bomb North Vietnam radar. Other evidence showed he never knew about efforts to conceal the missions or falsify records, and took action to make sure the practice was discontinued.

Because of the new evidence, Lavelle has been formally nominated to the rank of four-star general again.

The Senate will have to vote to approve the promotion.

Air Force officials said the promotion would not mean any financial benefit for Lavelle's survivors.

But it would set the record straight.

"For those of us who care about history, the vindication of Gen. Lavelle's conduct during the Vietnam War is important news," said Webb, a combat veteran of the Vietnam War.