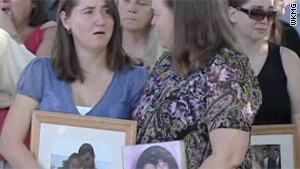 Loved ones of the four men killed in a traffic accident gathered for a news conference on Tuesday in Orlando.
STORY HIGHLIGHTS
RELATED TOPICS

(CNN) -- Roy McConnell and his three sons left their wives and children to go see the film "Predators" in St. Petersburg, Florida, Saturday night. They were enjoying a family reunion with a week at the beach.

Around 4:30 a.m. Sunday morning, Anais McConnell woke up and noticed her husband, Nathan, wasn't lying beside her. She got out of bed and woke up the other women in the house. They waited on the sofa for the men to return, hoping they hadn't been carjacked.

They saw a television report about an accident involving a black car, similar to the one the men drove to the movies, that left four people dead, but they didn't want to consider the possibility that it could be their loved ones.

Anais McConnell said police weren't returning their phone calls. Hours later, authorities showed up on their porch to bring them the news: Their husbands were dead.

Anais McConnell, as well as her sister-in-law and mother-in-law, were widows.

Their widows spoke about their losses during a news conference Tuesday in Orlando, Florida, holding framed photographs of the men. They said they hope that sharing their story will make people think twice before getting behind the wheel after drinking.

"He wanted to teach our son how to play football and how to treat a girl right," said Elroy McConnell's wife, Sandie.

Demetrius Jordan, the driver of the other car, has been charged with four counts of manslaughter while driving under the influence and one count of serious injury while driving under the influence, according to a report from the St. Petersburg Police Department. Jordan, 20, and his passenger, Mario Robinson, also 20, were taken to Bayfront Hospital with serious injuries soon after the midnight accident. The McConnell men were pronounced dead at the scene, according to the report.

Kelly McConnell had celebrated his 19th birthday with his family and girlfriend the day before, a family member said.

As the women described the men's accomplishments and characters, there were some chuckles and many tears. One of the women, debilitated by grief, was carried off in the middle of the news conference.

The reality was still hard to accept, but they didn't want to dwell on why this happened to them, a few said.

"I hope we could work toward forgiveness," said Amy Voelker, Roy McConnell's widow, who also lost her three sons. "We want to honor our guys... it would be tragic to let that young man's decision affect us in a negative way."

Voelker said the family members who stood beside her during the news conference represented only a fraction of the people affected by the men's deaths, and she hoped others could learn from the horror that had befallen her family.

"I'd hate for anyone else to have to bear this type of tragedy," she said.

As the news conference ended, family members placed the men's photographs around a tree, where others could see and remember.