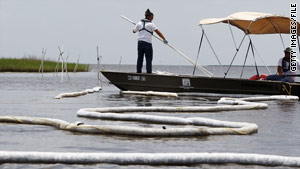 (CNN) -- Testing has found that eight dispersants, including one used in combating the Gulf of Mexico oil disaster, are no more toxic when mixed with oil than the oil alone, the Environmental Protection Agency said Monday.

The tests prove that the oil itself, not the dispersants, is "enemy No. 1," Paul Anastas, EPA assistant administrator for research and development, told reporters on a conference call.

Use of the dispersants to break up oil after the April 20 Deepwater Horizon rig explosion sent millions of gallons of crude gushing into the Gulf has been a controversial topic.

Testing was done on sensitive marine species in their juvenile life stage, when they are at their most sensitive, Anastas said. During tests, researchers increased the concentration of the dispersant, mixed with Louisiana sweet crude oil, to concentrations even higher than that species are expected to encounter in the Gulf, Anastas said.

The EPA in May directed BP, the company responsible for the ruptured well, to analyze dispersants for toxicity and effectiveness. BP reported it was unable to find a dispersant that is less toxic than Corexit, the product currently in use. Afterward, EPA began its own research into the eight dispersants.

Video: An end in sight for Gulf leak?

On June 30, the EPA released the results from its first round of testing, which showed that none of the eight dispersants appeared to have harmful effects on the endocrine systems of marine life.

"I have not seen any evidence, any data, that has shown wildlife sickened or killed because of dispersants," Anastas said Monday.

In addition, researchers have seen no data to suggest the dispersant has spread away from the well head, Anastas said.

Asked about the oil sinking to the sea floor because of the dispersant, Anastas said the purpose of dispersant is to put the oil in a form where it can be broken down by natural microbes -- where it is now. During that process, the microbes metabolize the oil, breaking it down until it turns into carbon dioxide and water.

"What we ultimately want is this hazard, the oil ... to of course go away," he said. "The way that it goes away in nature is to be metabolized by these microbes."

The ruptured well is currently capped. No new dispersants have been released into the Gulf since July 19, Anastas said, and the dispersant appears to be keeping the oil away from the shore. By law, dispersants cannot be used closer than three miles to shore.

Rep. Edward Markey, chairman of the House Energy and Environment Subcommittee, has said the Coast Guard and BP ignored a federal directive to allow dispersants only on rare occasions. Asked about Markey's comments, Anastas said the EPA worked closely with the Coast Guard after issuing that directive, and the amount of dispersants used did decrease.

It may be true that EPA did not agree on every decision or waiver of the amount of dispersant being used, the decision was that of retired Coast Guard Adm. Thad Allen, the federal on-scene coordinator. The EPA believes the use of dispersants was an important overall tool, Anastas he said, but said they were a "last result" and an "environmental trade-off not to be taken lightly."

Allen on Sunday defended the use of dispersants as a "very disciplined" procedure. Field commanders used dispersants when oil was spotted by surveillance aircraft and no other method of cleaning it up was available in the area, he said.

BP also dismissed Markey's allegations and said it has worked closely with the EPA and the Coast Guard from the start.