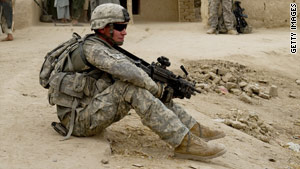 A 15-month-long Army study on suicide prevention concludes there is a need to promote and encourage healthy behavior.
STORY HIGHLIGHTS

Washington (CNN) -- A "permissive" environment with inconsistent discipline is one of the factors leading to a spike in Army suicides, according to a new report released Thursday.

The 15-month-long Army study on suicide prevention concludes there is a need to promote and encourage healthy behavior among troops as one of the key means of reducing suicide levels. Moreover, the report called on commanders to reinforce efforts to discipline soldiers for substance abuse, criminal behavior and disciplinary problems.

Many of today's commanders are so focused on getting ready for deployments to war zones, some of these issues have slipped through the cracks, according to Army officials who briefed CNN ahead of the release of the study.

Chiarelli led the review team. "What we witnessed firsthand were real indicators of stress on the force and an increasing propensity for soldiers to engage in high-risk behavior," he wrote.

In fiscal year 2009, 239 soldiers committed suicide in both the active duty and reserve force, the report noted. In addition, 146 soldiers died due to "high risk" behavior, including 74 drug overdoses. During the same time frame there were 1,713 suicide attempts, the report said.

The Army found some form of "high-risk" behavior such as self-harm, illicit drug use, binge drinking or criminal activity was a factor in most of the deaths.

"For some, the rigors of service, repeated deployments, injuries and separations from family resulted in (a) sense of isolation, hopelessness and life fatigue," Chiarelli said. He also noted sometimes there has been a "permissive unit environment" which in some commanders "failed to hold soldiers accountable for their actions and allowed for risk taking behavior -- sometimes with fatal consequences."

Linda Bean's son Coleman, of East Brunswick, New Jersey, was 25 when he committed suicide in 2008 a few months after his second tour in Iraq. The Army sergeant had been diagnosed with Post-traumatic stress disorder, she said.

"I appreciate that the Army needs to identify and address drug- and alcohol-impaired troops," Bean said. "Any workplace should take the necessary steps to combat that."

But Bean said the report lacks meaningful information that can help troubled soldiers and their families.

"It's critical that the Army and the Veterans Administration bring our communities into the conversation, and show us in a very clear and easy way how to access resources and services everywhere, including rural areas far from an Army base," she said. "These services exist."

Bean said such information is included in the report, but "in a very minimal way."

"It's a really modest list, buried in two paragraphs on Page 18," she said.

In his report, Chiarelli was not singling out any particular unit, Army officials said, but rather underscoring the need for commanders to focus on soldiers' behavior even as they prepare for overseas deployments.

The Army has long worried that some commanders are so focused on taking their entire unit on deployment, they may not realize or acknowledge that some troops with substance abuse or behavior problems should stay behind for treatment and not deploy. Officials plan to improve record-keeping so a commander will be more aware of soldiers' records of problematic behavior.