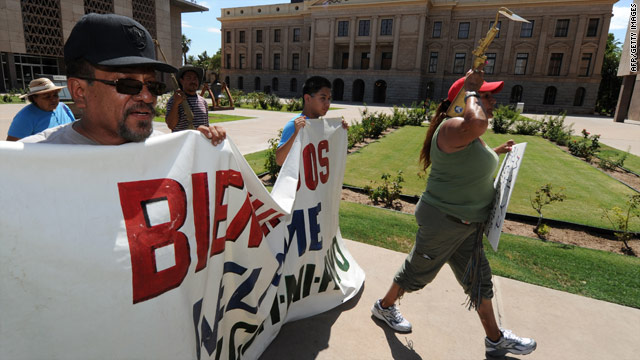 Phoenix, Arizona (CNN) -- A legal battle over a tough Arizona immigration law appeared certain after a federal judge granted a preliminary injunction Wednesday that blocked the most controversial parts of the law a day before it was to take effect.

The injunction means that, at least for now, police are prevented from questioning people's immigration status if there is reason to believe they are in the country illegally.

U.S. District Judge Susan Bolton also blocked provisions of the law making it a crime to fail to apply for or carry alien registration papers or "for an unauthorized alien to solicit, apply for, or perform work," and a provision "authorizing the warrantless arrest of a person" if there is reason to believe that person might be subject to deportation.

Arizona Gov. Jan Brewer said the state would file an expedited appeal to the 9th Circuit Court of Appeals, signaling a legal escalation that some expect will end up before the U.S. Supreme Court.

Other parts of the law will go into effect Thursday as passed. This includes a ban on so-called sanctuary cities, and the criminalization of hiring day laborers who are in the country illegally. The parts of the law dealing with sanctions for employers who hire illegal immigrants also withstood the first legal test.

CNN senior analyst Jeffrey Toobin said the ruling reflects the government's argument that immigration enforcement should be dealt with at the federal level.

Video: 'Too early to be happy'

Video: What's next for the immigration law?

"Arizona may have good intentions, they may be trying to make up for where the U.S. government has failed, but what the judge is saying is, this is not the way to do it.

"I think this a case very much destined for the Supreme Court," as other states pass similar laws, Toobin said.

Seven lawsuits, including one filed by the Department of Justice, are seeking to block implementation of the law, signed by Brewer in April.

Arizona state Sen. Russell Pearce, author of the law, said he foresaw a protracted legal fight from the beginning.

"I wrote it to go to the supreme court," he said before the ruling came down. "I'm begging for that fistfight at the Supreme Court. We will win in a 5-4 decision and finally settle this problem."

He added, "My message to the judge is uphold the Constitution. Uphold state's rights. This is a battle of epic proportions. This is the states versus the central government."

The Court of Appeals could take up the case in a matter of days, but the earliest the Supreme Court could look at it would be October, because the high court is in summer recess.

Brewer said that she was disappointed by the ruling.

"This fight is far from over. In fact, it is just the beginning, and at the end of what is certain to be a long legal struggle, Arizona will prevail in its right to protect our citizens," she said in a statement. "I am deeply grateful for the overwhelming support we have received from across our nation in our efforts to defend against the failures of the federal government."

She emphasized that Wednesday's action was a temporary injunction and that many other parts of the bill will go into effect as planned.

Another supporter of the law, Maricopa County Sheriff Joe Arpaio, said that he and his crusade against illegal immigration will not be deterred.

"I am not really disappointed about the judges decision," Arpaio said. "I know what my policies are, and we are going to continue doing what we have been doing."

The Center for Immigration Studies, which advocates immigration reduction, was disappointed but not surprised by the ruling, said Executive Director Mark Krikorian.

"If the opponents hadn't turned it into this bogeyman, it would have been a useful, if modest, tool for the police," Krikorian said.

He argues that the Arizona law wasn't intended to usurp federal authority.

"Arizona does not have its own immigration policy, even with the law. They are buttressing federal law," Krikorian said.

Arizona Sens. John McCain and Jon Kyl, both Republicans, also came out against the ruling.

"Instead of wasting taxpayer resources filing a lawsuit against Arizona and complaining that the law would be burdensome, the Obama Administration should have focused its efforts on working with Congress to provide the necessary resources to support the state in its efforts to act where the Federal government has failed to take responsibility," they said in a joint statement.

"While we understand the frustration of Arizonans with the broken immigration system, a patchwork of state and local policies would seriously disrupt federal immigration enforcement and would ultimately be counterproductive," the statement said. "States can and do play a role in cooperating with the federal government in its enforcement of the immigration laws, but they must do so within our constitutional framework."

While officials and their staff issued statements, a small group of activists in Phoenix expressed how they felt about Arizona's law in a traffic-stopping way.

Four protesters wearing hard hats and work boots climbed a crane high above the streets of downtown Phoenix and unfurled a banner that read "Stop Hate."

The banner also had a black mark through the number 1070. That was the number assigned to the immigration measure when it was introduced in Arizona's legislature as a bill.

Capt. Scott Walker with the Phoenix Fire Department called the four protesters experienced climbers and said they would be arrested when they came down.

Reaction to Wednesday's ruling on the Arizona law was not limited to the United States.

Applause erupted at a protest outside the U.S. Embassy in Mexico City when a speaker announced the judge's decision.

"I think it is a big victory, and it is the start of many more," said Sergio de Alba, president of the National Confederation of Workers and Farmers Organizations.

Minutes earlier, he had called on Mexicans to boycott products from the United States in protest.

Protesters attached signs to a gate in front of the Embassy, with one slogan saying, "Boycott Against Arizona-Nazizona, home of hunting migrants and the Ku Klux Klan."

Opponents say the law will lead to racial profiling, which is illegal. The government's lawsuit, however, didn't use that rationale in it's lawsuit. It argued that Arizona was usurping a federal authority.

Supporters point out that the law prohibits racial profiling and that people cannot be stopped and asked for proof of legal residence based solely on their looks.